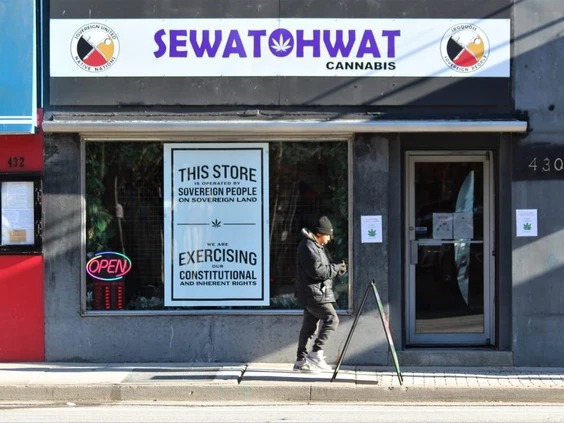 “The store is run by sovereign people on sovereign land,” reads a company sign. “We are exercising our constitutional and inherent rights.”

The first store, Spirit River Cannabis, says the same thing. “We exercise our constitutional rights and our treaty rights to ward off economic genocide.”

Canada is no stranger to unlicensed cannabis shops. Before legalization, you couldn’t walk down a street in Toronto or Vancouver without seeing retail outlets selling cannabis.

Police have since cracked down on unlicensed businesses, including the closure of businesses on First Nations land.

The hands-off approach was so controversial in inland British Columbia that regulated pot shops took the province to court.

But in Ontario the situation is less controversial. Until the First Nations started opening stores in urban areas. At the moment there are only two in London, Ontario. But the precedent has been set.

The result of land recognitions?

In Canada, people would recite the Lord’s Prayer at the beginning of meetings, events or other gatherings. Although Canada is technically a secular nation, its population from 1867 through the 1960s was predominantly European decent and Christian.

Eventually, people dropped the Lord’s Prayer. And for a time, Canada was actually agnostic and secular. However, in the 21st century, the situation began to develop again. Far-left ideologies originated in the universities and began to spread into human resources departments and government bureaucracies.

Part of this far-left ideology is that Canada is a neo-colonial state founded on racism and white privilege. And this is how people recite “land acknowledgments” at the beginning of any gathering, event or other gathering.

In common parlance today, land recognition is a way for non-Indigenous peoples to acknowledge the enduring effects of colonization and to show respect for Indigenous cultures and traditions.

But in reality it’s an attempt to have her cake and eat it too.

In this sense, land recognitions are a substitute for more substantive actions, such as addressing issues of land jurisdiction and reconciliation. Left-wing ideologues say that if they recognize that indigenous people used to live here, they don’t have to give the land back.

Either the City of London is lawfully Indigenous land. Therefore, its residents should at least pay rent to the Chippewa Nation.

Or this is the crown lands conquered by wars and genocide. And so these land recognitions are just propaganda tactics to convince people that all is well and good.

So what is it? Does the land London sits on belong to the colonial crown or the Chippewa nation?

Or is there perhaps a third possibility?

One that rightly destroys the crown’s claim while also acknowledging the Chippewa nation. But without violating the property rights of current London residents, regardless of their ethnic origin?

As of this writing, the owners of both stores have yet to respond to a request for comment. However, the owner of Spirit River Cannabis spoke to CBC earlier this month.

Maurice French is a Chippewas entrepreneur of the Thames First Nation. He said he didn’t want to start a fight, just fight back against “economic genocide.”

French cites London’s land recognition as a raison d’être for operating outside the jurisdiction of the province’s cannabis regulator.

The shop has a sign stating that the trading post is protected by Sections 25 and 35 of Canada’s Constitutional Act.

French’s uncle, adviser, clan chief and indigenous rights activist Del Riley told CBC, “Our rights come from our nation, and the province of Ontario is not a nation.”

This isn’t the first time French have faced the Crown. In 2018, the police searched one of his shops. They accused him under the Cannabis Act of possessing cannabis with a view to selling it, which remains illegal unless sanctioned by the authorities.

French and his lawyers have filed a constitutional complaint. French’s lawyers argued that by raiding the Aboriginal cannabis store, police denied “the Aboriginal approach to traditional healing and herbal medicine.” Which is an indigenous cultural right under p. 35 of the Charter of Rights and Freedoms.

“We, as First Nations, have a traditional right to sell our medicines on our territories,” French told CBC.

And while selling cannabis on First Nations reservations is one thing, opening stores in urban centers is another.

Police have nothing to do with raiding First Nation cannabis stores. Whether on actual reservations or downtown London, Ontario.

Indigenous peoples have rights to cannabis.

Historically, First Nations were here first. According to a European-based statement of property rights, First Nations are the rightful owners of the land and resources as they are the original users.

From a political point of view, the state is a territorial decision-making monopoly.

A monopolist of final decision-making will cause and provoke social conflicts in order to “settle” the dispute to his advantage.

The state claims that First Nations cannot govern themselves, so they steal their resources. When inevitable conflicts arise, the state uses its justice system to further isolate First Nation communities as they continue their plunder.

As simple as that.

From a biological point of view, property rights are an inescapable fact of nature.

All living beings must take up space and consume resources. Given the nature of human evolution, our ability to adapt and transform resources differs markedly from other species. However, this does not negate these territorial claims. Through voluntary exchanges, we can transfer a territorial claim to another human being.

Our ability to work together peacefully creates a market that can produce anything from air conditioners to zippers.

The fact that all goods ultimately come from natural resources only underscores this fact. This unique “real estate market” can set us apart from other species. But it does not change the fundamental aspect of ownership as a biological mechanism.

An organization – like the state – that disrupts this process by enforcing compulsory confiscation of property is an insult to the territorial claims that are the evolutionary building blocks of human civilization.

Secession is the way to go

Canada has negated property rights, which has caused all sorts of environmental damage. The fact that First Nations have laws that predate this government proves that secession is a legitimate answer to these problems.

Secession would mean that these resources do not belong to the Canadian government. These resources are the private property of First Nation rulers, who have never willingly relinquished these rights.

Any debate about sharing the profits of resources you rightfully own is absurd.

If First Nations are truly sovereign, a declaration of secession is the only sensible course of action. All individuals – aboriginal or not – cannot continue to consent to this predatory corporate system.

“Canada” is a conceptual entity, literally random lines on a map. “Canada” is a social fiction set in a history indelibly linked to railway financiers, British bankers and power-hungry politicians. National identity is a civic religion.

You cannot acknowledge someone else owning your land, but you can live and benefit from it without their consent. Just as one cannot be sovereign and still identify with a nation that uses the British Crown as its sole sovereign.

Private property is not a European concept.

Private property is not a European concept imposed on First Nations. It’s a biological necessity. Consider how the indigenous fishing system worked prior to European colonization.

The Maritime Provinces and Coast of BC have suffered a commons tragedy since the arrival of Europeans.

But there was a robust system of private property before that. The predictability of salmon runs led to land ownership in specific locations, just as weirs and traps were owned by individuals or families.

You could transfer these rights by barter or gift. The West Coast natives owned streams and banks. This in turn improved spawning beds and initiated the idea of ​​moving eggs from one place to another, thus conserving fish populations.

Property existed even among the buffalo herders. Although the plains and buffalo were too vast and plentiful to be considered scarce, the wealth that arose from a buffalo carcass introduced scarce goods and thus was saved and allocated to private ownership.

Indigenous property rights are never static. They evolve as needed and become more sophisticated as land and resources become scarce relative to population. The notion of propertyless aborigines living under “primitive communism” emerged as a European justification for stealing already owned land.

After more than 150 years of central planning through the Indian Act, perhaps it is time to allow indigenous people to own what is rightfully theirs.

And suppose you want to keep acknowledging stolen land at the start of meetings, events, or other gatherings. If so, it’s time to think about the consequences.

It’s an attempt for the crown to have their cake and eat it too. Either give back the land or argue that European colonization justifies stolen land.