Cannacurio # 43: Where will the next cannabis licenses be issued?

You can’t read a cannabis industry newsletter today without seeing articles exaggerating the future effects of adult use programs in New York, New Jersey, Virginia, and New Mexico. This even affects the share prices of Canadian approved manufacturers, as the uninitiated believe these companies will benefit from new U.S. programs. However, observers like us know that there is a delay between the issuing of state press releases and the issuing of new licenses – and even longer until revenue is generated.

All is not lost, however, as there are some “warm-up bands” on stage that have been or are being licensed prior to major licensing events in NY, NJ, VA and NM.

Three new companies received licenses following an RFP process that was completed in February: Valor Craft Cannabis Company in New Castle, CannTech Research in Dover and Georgetown and EzyCure LLC in Harrington. Each of the new licensees, selected from 10 different applicants, had experience in the cannabis industry, either in Delaware or elsewhere, according to the Delaware Business Times. 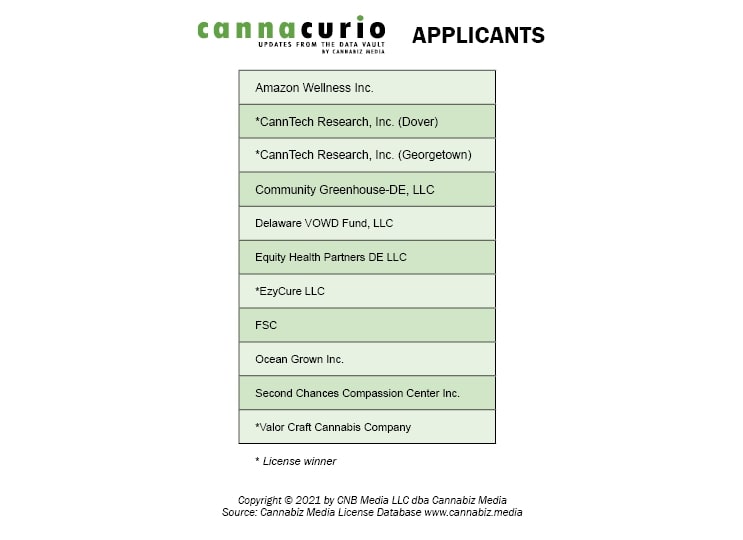 The Rhode Island program includes three pharmacies and 60 cultivators. The pharmacies have been open since 2013 and 2014 and have tried vigorously to defend their oligopoly. The state received 45 applications for a lottery to operate six new pharmacies and has since issued an RFP to a company or individual to run a lottery to issue the licenses on or about May 14, 2021. Unfortunately, no bidders have come forward to apply for the lottery, according to the Providence Journal. Other factors:

This is a small market that may soon be surrounded by adult use programs in the Northeast. Everywhere is a short drive from Rhode Island, so they can be price takers if they don’t know what’s going on across borders and in the region.

Georgia has a low-THC oil program that is challenging for patients and their families. The oil has to be obtained from the state and the patients have had to do without. The state is expanding the program in 2021.

Georgia is a populous state that borders Florida. The Sunshine State also started a low-THC program and switched to a medical marijuana system with over 300 pharmacies. The state is now grumbling to adults.

It will be important for Georgia to see how they set their pharmacy dispensing rules and regulations as some long-term entrepreneurs may try to get that license up and running and convert it to a real medical license, and eventually an adult license when the rules change. Some of Florida’s licensees have taken this route and paid off. The latest proposal is that each producer can have five stores in the state.

The district has a program that defies simple description. Possession is allowed, but sales are not. As a result, residents got creative to bypass the rules and rely on creative barter deals like selling $ 100 t-shirts that included a free gift of cannabis.

According to MJBiz Daily, the new regulator – the district’s alcoholic beverages regulator (ABRA) – has taken steps to increase the number of medical marijuana patients and make businesses easier to operate. The ABRA would also likely play a key role in introducing a new recreational program.

According to ABRA, there are two cultivation and two test licenses that have not yet been issued. A pharmacy license is also available for Ward 3 or 5. In early March, ABRA gave interested parties a window to submit letters of intent for the remaining five licenses.

Washington is a small market, although statehood may soon exist. The surrounding states of Virginia, Maryland, and Delaware all have programs – and VA just added adult usage. If the DC program doesn’t expand, the district’s residents will cross the line and / or use illegal suppliers – a challenge similar to Rhode Island.

While many are focused on the major license-producing states like California, Oklahoma, Colorado, Washington, and Oregon, where over 83% of the country’s licenses are issued, we’re missing out on other states that are tacitly licensing or evaluating their programs. All of the programs described above are limited license states for the time being and may offer opportunities for those who are patient, have capital, and have connections or partners in those states.

The questions raised are not new. With states being able to set their own rules for regulated products like tobacco, alcohol, gasoline and even lottery tickets, the cross-border shopping problem comes into play. The novelty of cannabis and the taxpayer money it brings will determine a large part of policy making and will lead to regulatory harmonization in some parts of the country.

Ed Keating is the co-founder of Cannabiz Media and oversees the company’s data research and government relations. He has spent his career working with and advising information companies on compliance issues. Ed has managed product, marketing, and sales while overseeing complex multi-jurisdiction product lines in the securities, corporate, UCC, safety, environmental, and human resources markets.

At Cannabiz Media, Ed enjoys the challenge of working with regulators around the world as he and his team collect corporate, financial, and licensing information to keep track of the people, products, and companies in the cannabis industry.