What is herming? – How female cannabis plants become male

Female seeds are mainly used in cannabis cultivation because of their high cannabinoid content and resin-rich trichomes.

Cannabis cultivators around the world have one important end point: getting a high yield from the best sinsemilla buds. This can only be achieved by planting feminized seeds, and it usually takes a lot of work to get that perfect yield.

Despite sowing feminized seeds, some of these cultivators will notice plants with pollen that other nearby plants will pollinate. If these plants are found in time, they will be quickly uprooted. Those that are not found spoil the yield with seeds.

That can be frustrating!

After a long search, the farmers were able to attribute this to the Herming. You may be wondering what Herming is …

In this article I am going to let you know everything that has to do with Herming in cannabis plants and how feminized seeds become plant stems with pollen.

Like all living things, plants also have a desire to reproduce. In a feminized cannabis crop, that urge persists.

Herming is the process by which female plants reproduce their seeds by developing pollen.

In other words, Herming is the term used to describe the natural transformation of female plants into hermaphrodites. In this case, female plants can self-pollinate their own seeds, as well as the seeds of other female plants around them.

Hermaphrodite cannabis plants are called “Hermies”. They are both the male and female sex organs. These plants can potentially pollinate the other female plants in the area, reducing the quality of the crop that can be harvested.

Having Hermies on your marijuana farm isn’t as bad as just having male plants with no females. But it’s just not ideal.

They produce buds with seeds and decreased levels of cannabinoids. Smoking these plant buds isn’t that satisfying either.

A farmer’s best attempt to get the best yield with guaranteed profits is to try their best to ensure that their feminized seeds remain as feminine plants.

Before we go any further, can you tell if your plant is male or female?

You can only confirm the gender of your plants when they are in the flowering / bud growth phase. At this point you will notice buds along the top of the plant stem.

The female cannabis can easily be identified by the formation of spider-like pistils. These whitish pistils grow where the stem and branches connect.

Male cannabis has seed sacs that contain pollen. They are not long, neither white nor spider-like.

These seed sacs later burst open to release the pollen.

These have both spider-like pistils and seed pouches. They can both be found on the stem of the plant two to three weeks after flowering.

Biologically, this anomaly can be traced back to the feminized seeds used. When female seeds are developed, one parent plant is needed to propagate the other’s seeds with pollen.

That is, one of the female parents is forced to produce pollen in order to produce all of the female seeds. This process is known as sledding. There is a recessive Hermie gene in all feminized seeds.

Different pathogens allow this gene to be dominant.

This is not the same for all types of weeds. Each tribe reacts differently to different stressors.

The plant’s response to these stressors is to ensure that its seeds are pollinated before they die from the stress.

Some plants come from a naturally producing Hermie generation. That is, their hermit-producing genes dominate the line of the plant.

Cannabis plants should be harvested in their flowering stage. As they mature, they have more time to pollinate themselves.

When mistakes such as excessive pruning, chemical exposure, or ineffective cultivation techniques are made, they encourage stimulation of male reproductive organ production in the plants.

As you understand, Herming can jeopardize an entire crop of cannabis. Cultivators must always do their best to ensure that they prevent the herming or identify the hermie plants as early as possible. before any real damage is done.

First of all, a cultivator must obtain seeds from reputable seed banks. Determination of the origin of the seeds used and details of their genetic make-up. In cases where the producer does not have access to reputable seed banks, he can first plant a sample of the purchased seeds in order to know their gender.

Stress is the main cause for Herming. Growers must ensure that the plants are not stressed in any way during their growth phase until harvest. All environmental factors must be considered and stabilized so that the system can be optimally maintained.

The harvest area should not be too dark. This would allow the farmer to easily see unusual growth along the stem of the plant. Regular checks must be carried out, particularly during the flowering period, in order to monitor plant growth.

Once a male plant or Hermie plant is discovered, it must be gently uprooted without breaking its pollen sac.

Discovering Hermies in your harvest isn’t the end of the world, nor does it mean your failure as a cannabis breeder.

Nevertheless, the harvest must be monitored daily and must not be exposed to extreme environmental conditions that predispose it to the Herming.

Remember, a female plant cannot become male. It can only transform into a hermaphrodite cannabis plant that carries both male and female sex organs – that is the pollen sac or pistil.

A quick tip: The hardness of the Hermie plant buds can be decreased by increasing the hardening time when processing the buds.

WHAT IS HERMAPHRODITE HERB, READ MORE … 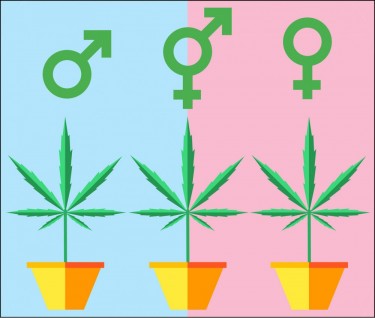 WHAT EXACTLY IS A HERMAPHRODITE CANNABIS PLANT? CLICK HERE! 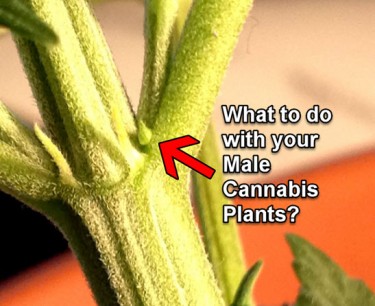 WHAT CAN YOU DO WITH A MALE CANNABIS PLANT, READ THIS!