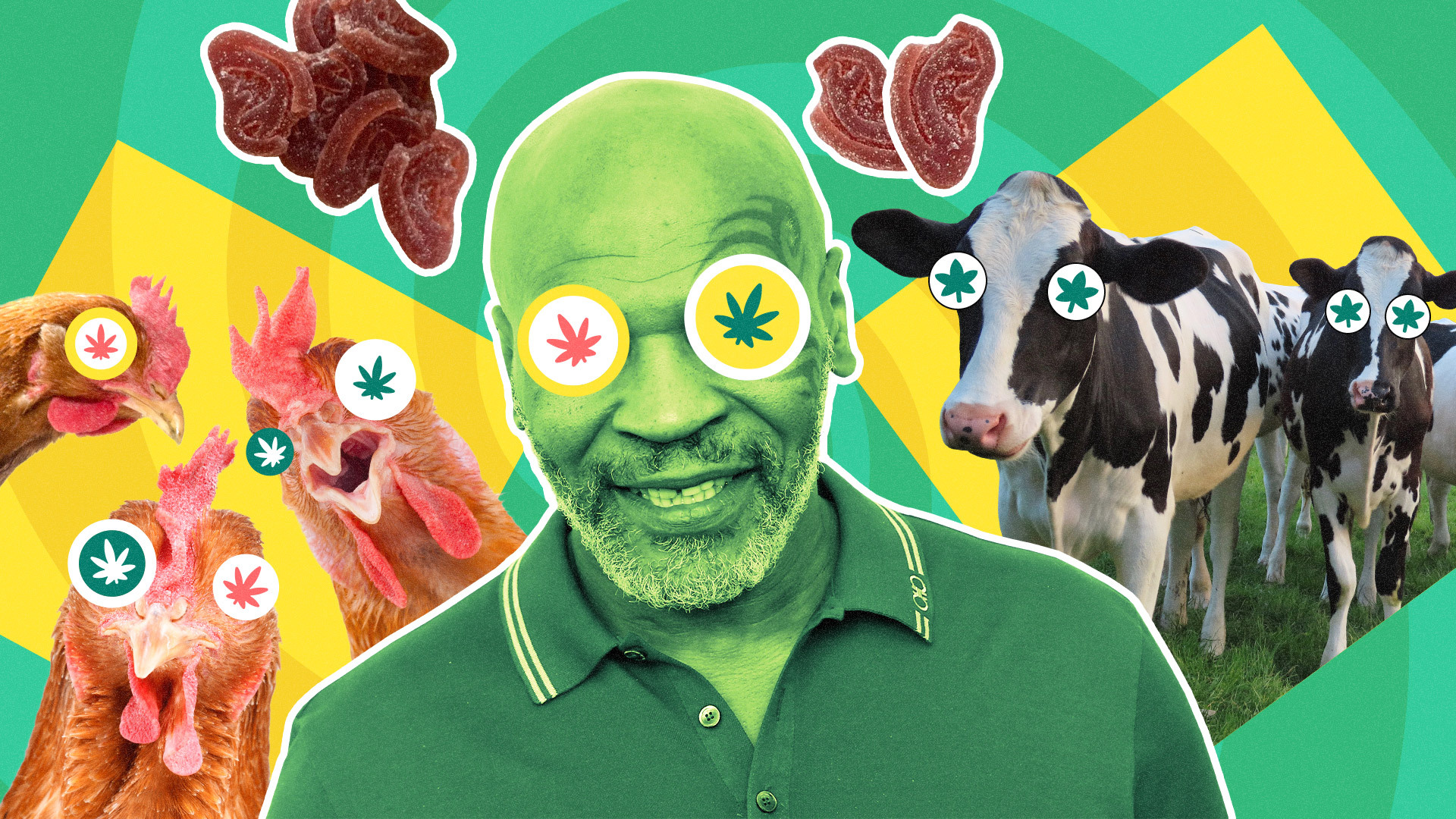 The weirdest, wildest weed stories of 2022

Cannabis can bring out the funny in all of us. It can also unlock wild creativity, odd choices, and head-scratching marketing campaigns.

Every year Leafly editors round up the year’s weirdest, funniest, stupidest, most audacious and shocking weed-related stories in one of our very favorite traditions: The Doobious Achievement Awards, named with a hat tip to the classic Esquire magazine feature.

Here are this year’s wonderful winners and laughable losers.

In their zeal to regulate products containing hemp-derived cannabis compounds, Minnesota state legislators passed a law that inadvertently legalized edibles containing up to 5 mg of THC per serving. The law took effect on July 1.

The Star Tribune reported that Republican state Sen. Jim Abeler says he didn’t realize the new law would legalize THC edibles. After an amendment passed unanimously during a legislative session in May, Abeler said: “That doesn’t legalize marijuana — we just didn’t do that, did we?”

They did. Abeler wanted to repeal the new law, but Democratic Gov. Tim Walz and the Democrat-controlled House are in favor of cannabis legalization—which is expected to happen in 2023. So the law remained in effect.

Former boxing champ, previously incarcerated person, and controversial cultural figure Mike Tyson crashed into the weed game in 2022 with Mike Tyson’s Bites, under his Tyson 2.0 brand. It easily became the most controversial edible of the year.

Tyson (left) and Holyfield, together again.

On the one hand, who among us would go to market with a physical incarnation our most shameful public moment? Talk about metabolizing your failures. On the other hand, crass marketing hit a new peak.

It offended bite victim Evander Holyfield, at first, though by the end of the year he’d signed on to launch a delta-8 version of the product—called Holy Ears—with a Holyfield line of cannabis products slated for 2023. Redemption is in the ear of the beholder, we guess.

But the most audacious candidate? That would be Gary Chambers, the Democratic senate candidate from Louisiana, who cut the year’s buzziest political ad.

While sitting in a New Orleans field, Chambers lit up a king-sized blunt to demonstrate his dedication to weed reform. The unique image set the Internet ablaze, making it all the way to late-night television in less than 24 hours. His spot drove home the fact that a cannabis-related arrest happens every 37 seconds. “Most of the people police arrest aren’t dealers,” Chambers said, “but rather people with small amounts of pot, just like me.”

Chambers lost his general election race to John Kennedy, but he won the hearts of justice champions worldwide.

In mid-October, a national cannabis company announced it would partner with Circle K to offer medical weed pick-up kiosks at 10 Florida locations.

Gas to go? Not so fast. (Courtesy Green Thumb Industries)

Within a week, officials with Florida’s health department put the kibosh on those plans. “Florida has never approved a Medical Marijuana Treatment Center to operate out of a gas station,” a spokesperson from the Department of Health told the Washington Examiner after the reported deal went viral.

The dream was glorious while it lasted.

Don’t even think about it.

“The Sonoran desert toad is one of the largest toads found in North America, measuring nearly 7 inches,” wrote the NPS. “These toads have prominent parotoid glands that secrete a potent toxin.”

Humans have been known to lick toads to get high from their secretions. But “it can make you sick if you handle the frog or get the poison in your mouth,” NPS officials warned. “Whether it be a banana slug, unfamiliar mushroom, or a large toad with glowing eyes in the dead of night, please refrain from licking. Thank you.”

The DEA is always a step ahead

The chart claimed a football or fire could both signify Oxycodone. A heart meant MDMA. A palm tree, a fir tree, fire, and a cloud all could indicate marijuana. A mushroom meant, well, mushrooms. And a Canadian maple leaf was “universal for drugs.”

The “decoder” was so widely ridiculed that the DEA Educational Foundation eventually deleted the tweet.

We suspect it was actually destroyed in a series of small, well-controlled fires

Police in northern India accused rats of eating hundreds of pounds of cannabis seized from illegal sellers and stored as evidence in police warehouses.

During a court hearing in the city of Mathura, police were unable to produce 850 pounds of cannabis that had been stored as evidence. So they blamed rats.

There seemed to be a disagreement within the department, however. Mathura City Police Superintendent Martand Prakash Singh told CNN that the cannabis had been “destroyed by rains and flooding” and not by rats.

Scientists at Kansas State University discovered that feeding hemp to cows helps them sit the hell down and chill the eff out.

In an absolutely serious study published in Scientific Reports, K-State veterinary researchers Hans Coetzee and Michael Kleinhenz discovered that a diet of industrial hemp “increases lying behavior and decreases biomarkers of stress and inflammation in cattle.”

In other words: If you feed hemp to a cow, it’ll lie down and chill. Science.

I’ll have the ‘special’ chicken Pad Thai, if you know what I mean

A farmer in the Lampang region of Thailand partnered with university researchers to study the addition of cannabis to a chicken’s diet.

Scientists at Chiang Mai University’s Department of Animal and Aquatic sciences say the chickens who were given cannabis had higher quality meat and eggs, needed fewer antibiotics (or none at all!) and were more resilient to inclement weather. According to Panyachatiraksa, chickens generally sell for 60 baht ($1.70 USD) per kg, but his chickens are selling for double.

Why are Thai farmers feeding cannabis to chickens?

They will turn your fingers orange but will not get you high. (Photo: Wingstop)

“Crafted with a blend of hemp seeds, terpenes, strawberry and cayenne pepper,” the restaurant chain announced, “The new flavor is designed to taste like 4/20 – capturing the herbal notes of the holiday and may even produce a mouth-tingling sensation – although the flavor won’t actually get you high.”

“As the cannabis industry grows, so does Wingstop’s desire to engage this audience,” said a company official.

His side hustle was smuggling coal to Newcastle

Yes. From New Jersey to California.

Ramy Joudeh told a federal court that he used his cell phone to coordinate the shipments from a New Jersey auto shop to associates in California. The action apparently happened while Joudeh worked as a prosecutor.

The New York Daily News reported: “The feds started investigating after a 787-pound crate on a truck bound for California was stolen at gunpoint as it left an auto body shop in South Plainfield, N.J. on March 26, 2015, according to court filings. That led to the discovery of more crates, the seizure of 550 pounds of pot the next day, and a web of phone records and names — including Joudeh’s.”

And yet, it seems like they were robbing on highways

According to Reason, San Bernardino deputies stopped Empyreal armored trucks on three separate occasions in late 2021 and early 2022, and seized a total of more than $1 million in cash under asset forfeiture rules.

Empyreal and its trucks were operating within state law. In a lawsuit, the company asserted that the stops were pretextual, meant to bolster the Sheriff’s Department budget while harassing legal cannabis companies.

The joint agreement between Empyreal and the Sheriff’s Department said that the deputies “are not highway robbers as previously reported in the media.”

And then Dr. Oz got his mojo smoked by Fetterman

In May, Dr. Mehmet Oz, peddler of quackery cures, won the Republican nomination for US Senate in Pennsylvania. Oz proceeded to run a stumbling, bumbling, and ultimately losing campaign against Lt. Gov. John Fetterman, an outspoken advocate of cannabis legalization.

Mehmet Oz says he disagrees with Fetterman’s position that marijuana should be legalized because Pennsylvanians need to get back their “mojo” and get back to work pic.twitter.com/0G7tiMIyYZ

Oz kicked off his general election campaign by hinting that Pennsylvanians were lazy shirkers who needed to get off the couch and back to work—and legalizing weed wouldn’t help the cause.

“You know there’s not enough Pennsylvanians to work in Pennsylvania,” Oz told Newsmax. “So giving them pot so they stay home is not an ideal move…I don’t want young people to think they have to smoke a joint to get out of their house in the morning. We need to get Pennsylvanians back at work. Gotta give them their mojo. And I don’t want marijuana to be a hindrance to that.”

That’s no way to get your aunties stoned

A Florida bride and groom allegedly conspired with their caterer to get the entire party stoned at their wedding reception. It did not end well.

The Miami Herald reported that several guests at the Feb. 19 event fell ill and required medical attention. One hospitalized relative suffered bouts of paranoia and had to be sedated. CNN reported that “some guests reported feeling “stoned” and “ill and high,” while another said he felt “weird, tingly, fidgety, and had an extremely dry mouth” after eating food at the wedding.

A police report filed after the event revealed that the lasagne tested positive for THC.

Timely reminder: Never dose anyone with anything without their informed consent. When we last checked on this story, one of the reception guests had filed a $30,000 lawsuit against the catering company.

Worst marketing campaign of 2022: These guys

Our 2022 Doobious Achievement in Marketing Award goes to the bros who thought it was a good idea to parade around MJ BizCon, the weed industry’s biggest annual show, in t-shirts that said “Buy Weed From Rich White Men.”

Some context: The Buy Weed From Women movement, created a few years ago by Jasmine Mars, was started by a Black women-owned design house that creates apparel supporting women entrepreneurs and cannabis legalization. The organization’s t-shirts have become a popular way to support women in weed, and to encourage consumers to make intentional choices when they purchase.

The BizCon bros might have aimed for clever and cheeky, but their message came off as tone-deaf and racist.

How Mom and Dad enjoyed dankincense back in the day

“I think it’s a vase. Or some sort of musical instrument.”

We could spend weeks scrolling through Reddit’s magnificent r/trees thread, and this, for us, was the top entry of 2022. Credit and respect to Reddit user GerardBinge for unearthing this absolute screamer of a throwback pic.