High in Life – Should Cannabis Be Part of Hospice Care?

However, as Americans age, the risk of terminal illness increases as more people are admitted to hospitals and hospices. The CDC announced that an estimated 1.4 million people in hospices are cared for by a variety of life-threatening diseases. That number is a huge increase from what has been achieved over the past 20 years. In these hospices, patients receive a special kind of care that slows down the painful process.

The care of the patients in hospices is carried out by compassionate people who are 100% available to make the last phases of life very pleasant. While these hospices are doing their best, there are still cases where some patients do not get better with the care they receive.

Of course, this is a problematic situation, and it has got medical experts looking for solutions to hospice, and marijuana is one of the most viable ideas they are exploring.

Despite the good intentions, the legal status of marijuana affects its use and effectiveness in hospices. Although some states have legalized marijuana, it is still not legally accepted at the federal level. The lack of federal support makes it difficult for some health care providers to prescribe cannabis to their patients in hospices.

Despite the obstacles, does marijuana have a place in the hospice? Read on to find out.

Marijuana is used in hospice care to alleviate patients as it plays an important therapeutic role for patients dealing with the emotional distress associated with an incurable disease.

Hospices are turning to marijuana to reinvent their approach to Medicare for patients. These hospices want a more patient-centered care experience that eliminates the idea that they are cold, ineffective, and undesirable.

But medical marijuana has become a new focus for these hospices. As Americans’ attitudes towards marijuana change (from suspicion to acceptance), more hospices are being encouraged to consider it as a treatment option.

How hospices use marijuana

Primarily, hospices use marijuana as a treatment alternative to alleviate the patient’s mental and existential suffering. The mild euphoria that marijuana offers gives the patient a sense of wellbeing that eases the body, mind, and spirit when they come to terms with the possibility of death.

In 2019, a study showed the effects of cannabis and CBD on hospice and palliative care settings. The data comes from over 300 nursing professionals in 40 American states. The professionals offered “overwhelming support” for the use of marijuana in hospices, regardless of their legal status in the state.

With such factual details and a preference for marijuana in hospices, one can only ask, “How does it help those in the hospices?” Here are answers to that question:

Pain reduction is one of the main benefits of using marijuana in hospices. Patients sometimes experience excruciating pain, which makes them uncomfortable and makes their stay in hospice uncomfortable.

But with medical marijuana treatment, the pain is reduced and replaced with a feeling of euphoria that calms the patient’s mind, making them numb from the pain. These health benefits from marijuana can only be effective if the substance is used consistently.

Cannabis is an amplifier that increases the sensory perception and awareness of the patient and thus leads to a better perception of taste, senses and music. Remember that some people in hospices are older people who are gradually losing their ability to recognize feelings and sense of taste. But when marijuana is administered it raises the patient’s awareness so that they can appreciate every moment, even when their days are numbered.

The patients in hospices often have problems with their appetite due to the intensive treatments (e.g. cancer patients). Decreased appetite is also common because they are emotionally depressed and the diseases are affecting their mental health. But CBD is an appetizing compound that encourages them to eat regularly and also have a snack between meals. A hospice patient has a greater chance of better treating illness if he or she eats nutritious meals on a regular basis.

Anxiety is a common symptom that hospice patients experience due to fear of death and concern for their families. However, when medical marijuana is treated with THC and CBD, it contains effects such as anxiety.

When THC is given in smaller doses, it reduces anxiety and CBD does the same, making the patient feel relaxed and calm, which greatly improves their health.

Medical experts are increasingly excited about the enormous potential of marijuana. People around the world are starting to appreciate the value of cannabis. Marijuana products that have been tested and approved for use should be well integrated into the healthcare system because of their immense benefits.

Experts and carers in hospices benefit from cannabis and CBD. Both its recreational and medicinal properties are valued by caregivers and patients. However, in order for marijuana to achieve its high potential in hospices in the future, there must be a uniform legal status for cannabis at the federal and state levels.

Until we have such a uniform status, marijuana will continue to affect the lives of hospice patients in the ways currently available, helping them cope with their terminal illnesses.

Weeds in the hospital, read more .. 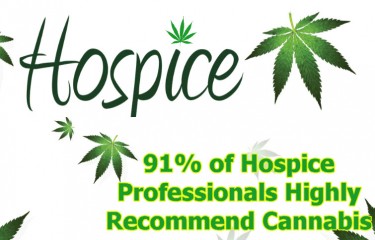