Tetrahydrocannabinol (THC) and cannabidiol (CBD) are the two main components of cannabis. Both cannabinoids require the presence of fat to become bioavailable in the human body after consumption. They are also fat-soluble, meaning that cannabinoids are stored in the fatty tissues of our bodies.

THC in particular has been attributed by scientists to have a high affinity for fats. When making cannabis infusions, you always need a good fat for the cannabinoids to bind to.

Many cannabis products are infused into a variety of popular fats. Butter is the most commonly used, especially for cooking and baking, although other common fats include coconut oil, olive oil, walnut oil, and avocado oil, to name a few.

But coconut oil is still the best among all these fats.

Coconut oil offers the most health benefits, especially when combined with cannabis. It contains high levels of healthy fatty acids, which not only have tremendous health benefits, but also act as an effective binding agent for the cannabinoids. Just one tablespoon of coconut oil meets the American Heart Association’s 13-gram saturated fat recommendation per day.

It’s also over 80% saturated fat, which makes it such a great carrier oil. Other oils like olives only have a saturated fat content of around 20%. Saturated fats are usually found in animal products and by-products like butter, although butter isn’t suitable for vegans.

Other vegetable fats such as avocado and sesame oil, on the other hand, are practically unsaturated. Saturated fats usually cause harmful health issues like high cholesterol when consumed in large amounts, but coconut oil just doesn’t have that effect on the cardiovascular system. It’s the perfect healthy fat because the medium-chain fatty acids don’t clog arteries.

Saturated animal fats are the most efficient way to unleash the therapeutic benefits of cannabinoids when consumed.

It also has powerful health benefits that no other fat or oil has:

And so much more.

Now, when you combine that with the health benefits of cannabis, you have yourself an extremely potent and therapeutically-fortified cannabis oil.

Types of coconut oil you can use for cannabis infusions

There are basically two types of coconut oils sold in the market: refined and unrefined. They each have their own benefits, although they can all be used to make a variety of cannabis oil infusions. What sets them apart is the processing methods they undergo.

Some unrefined coconut oils are sold and marketed as “cold pressed,” meaning no heat was used in the extraction of the oils.

This allows it to be converted into energy much faster, which is why MCT oils are popular with keto diet enthusiasts. MCT oil is also known as fractionated coconut oil.

When shopping for coconut oil to use in infusions, it’s always good to go organic, especially if you’re using these products for health benefits.

Cannabis Coconut Oil is such a powerful combination that can be used to improve overall health as well as reduce symptoms of chronic pain, heart disease, inflammation, diabetes, cancer, migraines, obesity and much more. This is largely due to coconut oil’s high concentration of saturated fat and medium-chain triglycerides, which allows it to act synergistically with the therapeutic cannabinoids found in marijuana. This allows the human body to efficiently absorb and metabolize these compounds compared to other carrier oils.

Oral ingestion or daily use has been shown to be backed by science and anecdotal evidence. 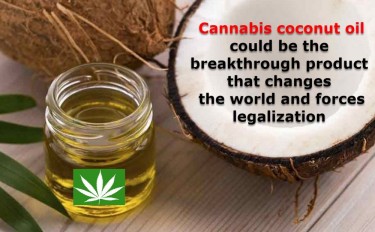