What do the strain names used in your cannabis products say about the product?

Cannabis products are named the same as anything in the world. Some names are unusual, some fascinating, some silly, and others logical. Most of these names have a story behind them.

There are also cannabis strains named after the other older strains of the generation. A perfect example of this is the Kush strain’s naming system.

Strains like Sputnik and Pre-98 Bubba Kush were named after memorable events in history.

These names keep memories of these events. Finally, we have names that give an idea of ​​the taste or aroma of the product, for example Sweet Dreams or California Orange, etc.

However, all of this was in the past.

These days, the naming system of cannabis products is not illuminating, and some may even leave you confused. The naming of these products is associated with very little effort. The breeders focus on developing the product without worrying about how to name it.

At least 20 new products are developed every year. New names have been added to the already confusing pile of names. It might have been understandable if these names were more than marketing strategies.

Recently I tried several times to think about the names of some of the products I bought from pharmacies, such as: B. my pre-roll packaging or the packaging on my 1/8. I tried so hard to see the products with just the name in a whole new light, but I came up short.

In the 1960s and 1970s, marijuana was exported to major countries in the world. Modern cannabis was called landrace tribes, and their seeds were also transported through cities to be transplanted to different regions.

Back then, tribes were named after their original geographic location. For example; Durban Poison from Durban, Colombian Gold from Colombia, Panama Red from Panama, and a few others that came from Afghanistan, Central America, Mexico, and Jamaica.

When breeders began to cross these strains, the genetic diversity of cannabis was born.

The crossing of these strains was done to satisfy the consumer’s hunger for better effects, new flavors and flavors, and just to satisfy a farmer’s curiosity.

Some breeds developed by chance.

Although many of these breeds are now extinct, their vacuum has been filled by newer hybrids that we have created over the years.

There is no international system for naming cannabis products. The name of a product lies with the breeder and the marketing agency responsible for promoting the product.

The most common method that breeders in the country use is for a name to be made by combining the names of the parent strains. A good example of this is the Triple G strain. His parents’ names – Gorilla Glue and Gelato 33 – have been cleverly combined into Triple G.

Some tribes are named after some people to honor them. For example, the gift from the Ringo tribe was named after one of the best CBD strain breeders named Ringo. Another example is Jack Herer, named after the famous cannabis activist.

Like the early methods of naming tribes, breeders still use the effects of a tribe to name it. An example of this is; Blue dream. When a customer sees a product called Blue Dream the first thing they do with it is that it can induce a dreamy calming state when used.

Most often, breeders name a product based on its morphology. For example, Purple Kush was named for its intense purple colored leaves. Other names have “purple”. The white widow, on the other hand, was named for the abundant white trichomes found on its flowers.

Some strains have been named after celebrities and other icons because of their market reach. Some include Khalifa Kush, after the famous Wiz Khalifa who is known as a rapper and avid cannabis smoker. Another variety is Margaret Cho-G.

But as I mentioned earlier, a larger percentage of the names of products found in the market are random and in some ways meaningless. These names are of very little use to the consumer.

Some breeders have claimed that these random names have hidden stories that support them. Regardless of how it is expressed, these names have no meaning to the consumer.

The naming system for cannabis products needs to evolve globally …

As more and more states legally adopt cannabis use, the number of newly developed strains will increase. The cannabis industry matures when the names of the products are consistent and regulated.

Or better yet, the names of the cannabis strains are specific to the breeder. For example, the cultivation of widely available OG Kush will be limited to just one grower. Other producers are prohibited from using the name “OG Kush”.

Rather, they would develop another unique name for their product.

In this way, products can easily be traced back to the manufacturers with just their name.

Another possibility is for a manufacturer to add their name to the product name as a prefix. This has been observed in states that have legalized the recreational use of cannabis products. An example is Emerald Jane’s Blue Dream and Artizen Blue Dream.

Some of the other ways the naming system can be better regulated in the future are:

Abolish the names of all tribes

Have a recognized system for naming cannabis strains. This can depend either on their effects, usefulness, or their cannabinoid content.

Every state must have a regulated naming system

The name of a cannabis strain needs to be consistent enough to ensure the same effects when buying products with the same name.

A regulated system for naming cannabis strains takes the pressure off marketing and public relations strategists who most consumers believe will find meaningless names.

Always confirm the source of any product before consuming it in any form. Also, don’t forget to always get your weed from reputable pharmacies. That way, you can be sure that the product is true to the name. 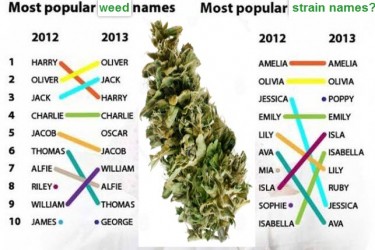 WHAT WOULD YOU CALL YOUR MARIJUANA STRAIN? CLICK HERE!