The Greater Fool – How Much Does a Free Cannabis Store Really Cost?

Much has been written about Sean Combs’ acquisition of vertically integrated cannabis assets in multiple states.

Per Wikipedia: “In finance, the greater fool theory suggests that you can sometimes make money by buying overvalued assets—items that cost dramatically more than their intrinsic value—when those assets can later be resold at an even higher price. In this context, a “fool” might pay for an overpriced asset in hopes that they can sell it to an even “bigger fool” and make a profit. This only works as long as there are enough new “bigger fools” willing to pay ever-increasing prices for the asset. Ultimately, investors can no longer deny that the price is unrealistic and at that point a sell-off can cause the price to fall significantly until it is closer to its fair value, which in some cases could be zero.”

Numerous industry experts have pondered whether the deal was a good one, and if so, for whom. When contacted by Cannabis.net I commented that based on Massachusetts assets and current market conditions it appears he paid too much but you will never know without all the financial and other due diligence data to see. But this isn’t a story about Mr. Combs or his deal. It’s about the other deal discussed in the Cannabis.net article.

In a way, cannabis assets are like a block of ice on a hot sidewalk in August. They are melting in value, not from the sun but from the shortened timeline until interstate commerce takes effect. We don’t know the date, but we do know it’s earlier than it was a few years ago. When that day comes, as I said in April, the canopy values ​​will go into free fall. When I first started exploring the fragility of cannabis growing assets, I also hosted The Green Rush, a two-hour weekly cannabis talk show. On the November 5, 2021 episode, we did a deep dive into interstate commerce with Professor Robert Mikos of Vanderbilt Law and we were joined by several guests including Beau Whitney, a fairly astute economist who has tracked cannabis and appreciated the capital destruction that comes from it resulting from the legal interstate transportation of cannabis will total $80 billion. That was a year ago. More indoor grow facilities have come online (including a $20 million grow facility in western Massachusetts in September 2022), and with inflation, these newly minted facilities are costing more, so $80 billion might be a bit short.

In Massachusetts, stores are given away for free in very limited cases. Don’t rush everyone out of here. We have approximately 235 stores open and the free giveaways are all one-offs and there are only a handful. This story is about the most famous one, Pleasantrees. Aside from an industry-wide email blast (kudos to whoever curated this list), a notable comment in a Cannabis.net article, and an article in the Green Market Report, their Lease Takeover Opportunity “offers a no-cost acquisition of their assets” reveals some interesting data.

The Amherst, Massachusetts store opened in August 2021 and is adjacent to the University of Massachusetts (main campus) and in close proximity to Amherst College. The shop is on the former site of Rafters Sports Bar & Restaurant, the popular hangout for local college students. The local non-student population is 40,000 and there are over 31,000 students within a mile radius (data cited is from the Pleasantrees flyer). Keep in mind that not all college students are 21, the legal age to purchase regulated marijuana in Massachusetts.

Massachusetts has 351 communities ranging from Gosnold in Dukes County (Martha’s Vineyard) with 77 residents to the city of Boston with 667,137 residents. Of these 351 municipalities, only 14 have more than 70,000 inhabitants. So Amherst seems like a great place. Let’s dive into a back-of-the-envelope analysis of some scenarios for the Amherst business. We break this down step-by-step for those who aren’t that familiar with numbers.

Subtracting the above costs from the income gives you how much money is left over to pay the rent. Monthly rent of $34,921 equates to approximately $420,000 annually. If we divide the rental amount by the percentage that is left to pay the rent, the result is the break-even level of income required to pay the bills and not turn a profit. This is the first step of what we are looking for. 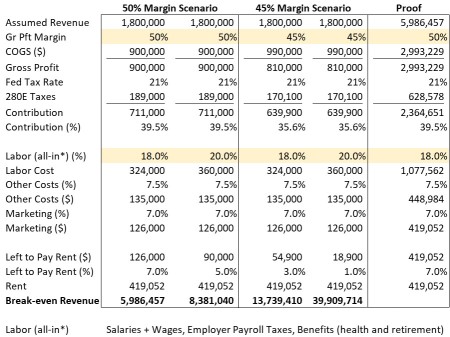 At 18% labor costs, this business needs to grow sales to nearly $6 million to break even. At 20% labor costs, breakeven rises to almost $8.4 million. If the gross profit margin drops to 45%, those break-even numbers go up even further. Massachusetts is experiencing margin compression and the Massachusetts cannabis market is under great stress, as Zach Huffman pointed out in an editorial in the November 9, 2022 Grown In newsletter; “A wave of debt restructuring threatens the adult consumer goods market in Massachusetts.” (Kudos to Zach Huffman’s coverage of the matter and his cost-per-gram research—if you don’t subscribe, you should). Our margin of 50% could be generous in the current environment.

Have you ever seen two gas stations in sight, one of which has a price per gallon up to ten cents higher than the competition, and yet customers are still buying at the more expensive station? Like agricultural products, gas is a commodity. So why do customers pay a little more; because the station is the one the customer is used to. Humans are creatures of habit and once a habit is formed it can be difficult to break. Customers instinctively visit certain stores for certain products. You get used to the routine, location, parking, layout, products, menus, etc. The customer knows what to expect and is comfortable with that expectation. Breaking this habit as an outsider can be challenging. Just ask the owner who sells the cheaper gas why customers still go to the other station that charges 10 cents more per gallon. Habits are hard to break.

Amherst has 3 retail cannabis stores. The first opened in September 2020 for adults and also serves medical patients. The second opened in August 2021 for adult use. Pleasantrees opened for adult use in February 2022 (the medical shop opened earlier, which is probably why the company says the shop has been open for over a year).

Looting a competitor’s customers takes discounts, heavy marketing, or both—and it costs money. Let’s look at how much from a revenue perspective.

We went back to our data set and asked two questions. If we assume a gross margin of 50%, what are the implications of reducing our margin by 1%? What is the impact of a 1% increase in marketing costs in the same 50% gross profit scenario? We had to treat these questions differently because of the 280E impact. A reduced gross profit margin reduces federal taxes below E280, but an increase in marketing expenses does not, since marketing is not deductible E280. 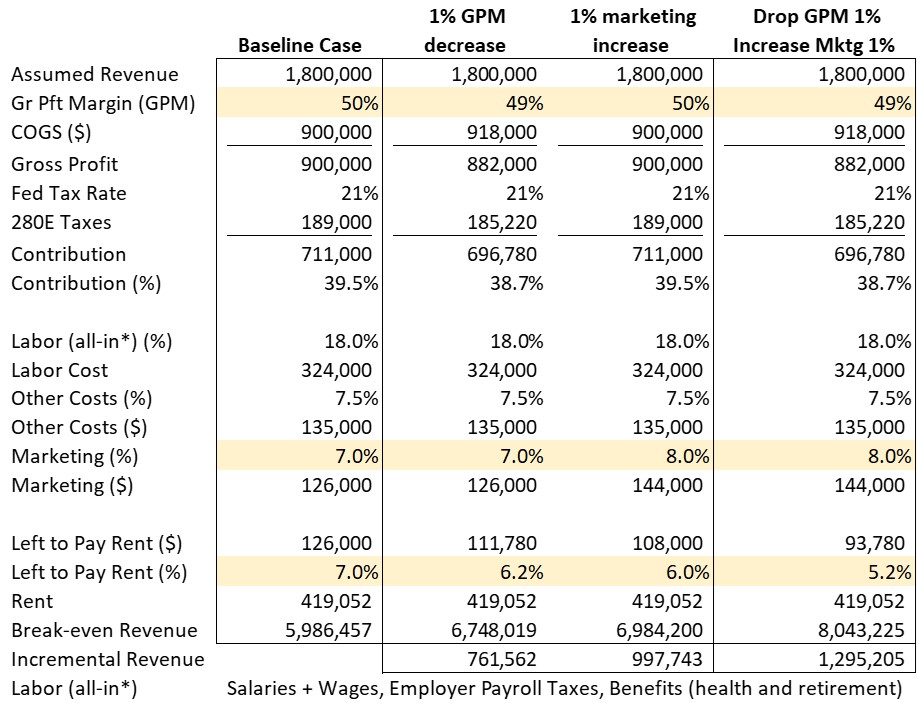 This is not a game for the faint hearted. When heavy discounts are required to drive volume, $8 million may not be enough to break even, let alone turn a profit. If you want a free business, you’d better bring lots of free money to fund the turnaround. Someone will agree to take over these deals. The open question is how long it will take and at what cost. Let’s hope for their sake that they have good financial advisers.

Does anyone know if Mr. Combs is hiring before he makes his next deal?

Run for the Hills: Will the Massachusetts Market Crash in February 2023 and why is that date in my crystal ball? 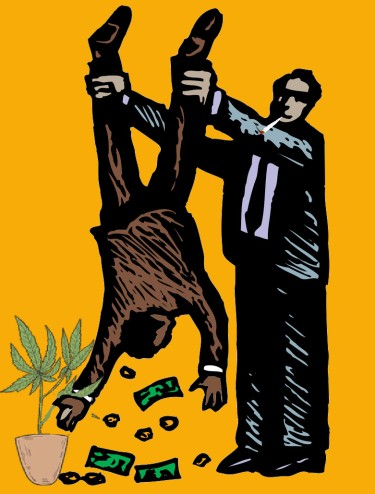 DID P. DIDDY PAY $100 MILLION TOO MUCH FOR CANNABIS WEALTH?