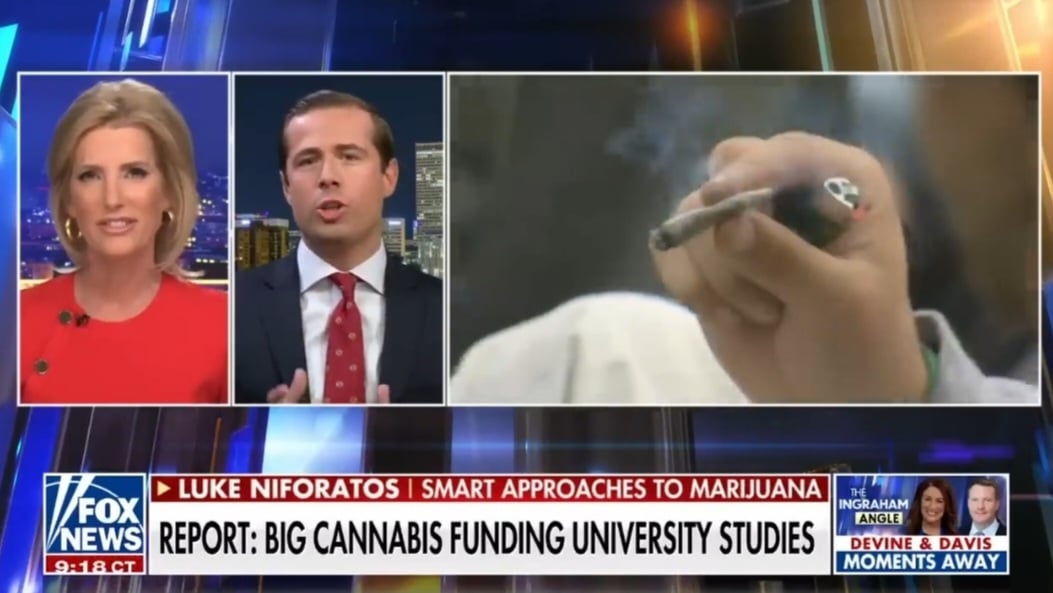 SAM Executive Vice President Luke Niforatos spoke with Laura Ingraham on The Ingraham Angle about how “Big Cannabis” funds UCLA, Harvard and MIT studies into the efficacy of cannabis for medicinal purposes.

“The mainstreaming of weed has come at the same time that the drug has been increasing exponentially in potency and THC content,” Ingraham warned, linking it to “violent behavior.” Ingraham frequently examines the dangers of pot and blames “pot psychosis” for the increase in mass shootings due to widespread legalization.

Niforatos then delivered a new mix of reefer madness and hysteria: “Big Marijuana is scared right now because there is now extensive research telling us that this new supercharged marijuana pumping industry is causing psychosis and schizophrenia,” said Niforatos. “We see that addiction rates are increasing. They’re after our children. All kinds of car accidents on the streets! So all of this comes from research.”

“So what are they doing?” said Niforatos, referring to the cannabis industry. “They go to their big brother tobacco, which by the way is their biggest investor, and they start pumping out fake, fake research. I’ll tell you right now, one of the people who funded UCLA’s millions of dollars of marijuana research — that company was called “Nugs.” It is not run by sir. Isaac Newton, right?”

Niforatos was referring to an investigative article in the Los Angeles Times examining cannabis research funding. UCLA researchers in particular have been met with claims that their lab research is truly independent.

Niforatos went on to describe that the people behind cannabis companies should not be taken seriously.

“These are the Canna brothers who run these companies and they’re not trying to advance scientific research, they’re paying for publicity and misinformation, and that’s what Big Tobacco did, they killed millions of Americans to make money, and that’s exactly what marijuana, along with its Big Tobacco investors, wants to achieve,” he said.

SAM was founded in response to legalization efforts in Colorado and Washington by former Congressman Patrick Kennedy, who supported medical but not recreational cannabis, and former White House drug policy adviser Kevin Sabet, David Frum, and others.

However, SAM has been criticized for picking negative statistics from studies on pot.

But who is behind SAM?

In 2016, Vice examined in detail who exactly is funding SAM’s agenda to fight cannabis legalization. Among the donors, they found a casino owner, a former US ambassador, police officers, prison guards, alcohol dealers, and a pharmaceutical company that sells fentanyl.

A $500,000 donation from Insys Therapeutics equates to a top donor donation from Arizonans for Responsible Drug Policy. Insys is a pharmaceutical company known for selling the pain reliever fentanyl in the form of a sublingual spray.

In 2019, the New York chapter of Smart Approaches to Marijuana was forced to disclose its donors just before legalization rolled out in the state. The state’s Joint Commission on Public Ethics rejected a request by the organization to keep its donors private.