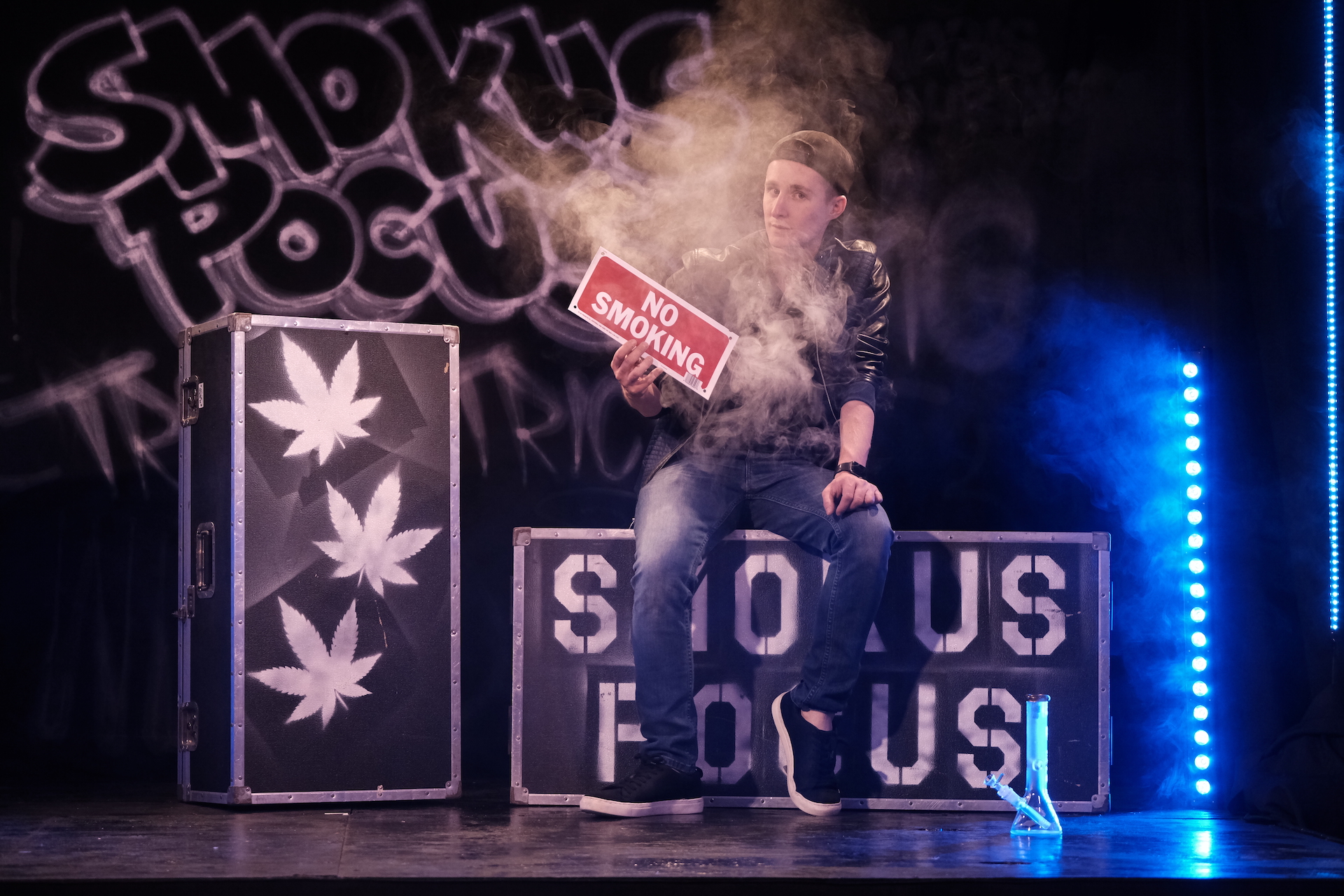 “Is this your eighth?”: Reflections from the magic show Smokus Pocus in NYC

Nowadays, if you live in a legal state, you can find all kinds of activities involving cannabis, even centered on the experience. Like yoga? You can cannabis-ify it. Painting, standup comedy, book club? That too.

As America’s entertainment epicenter, New York City, poised to launch its legal recreational cannabis market in the coming weeks (or months), is a seemingly intuitive place for artists and performers to weave weed into their shows. So when I received an invitation to a cannabis magic show, I knew I couldn’t pass up the opportunity.

Just minutes before magician Ben Zabin’s touring show, Smokus Pocus, was due to begin in Brooklyn, guests were walking past joints and blunts on the corner outside. The sound of someone playing “Pass the Dutchie” on their phone floated through the air while clouds of acrid smoke lingered between calls.

New York City permits public use of cannabis almost anywhere tobacco smoking is legal, and my fellow guests and I took full advantage of this. How else are you supposed to prepare for a marijuana magic show on a Saturday night?

Once inside, the stage appeared appropriately set. There was a bong on stage, boxes decorated with 4/20 slang, and colorful lighting. Then Ben Zabin entered the stage. The audience was at his mercy for 70 minutes.

A magician is nothing without his assistant. (Courtesy of Ben Zabin)

The NYC production of Smokus Pocus had all the tenets one would expect from a marijuana magic show, and thankfully, it’s scheduled to return to the stage on December 9th and 10th, respectively, in Baltimore, MD and Philadelphia, PA for future ones US tour dates. I mean, a bong lit itself, a spectator guessed a strain that appeared on a weed jar that Ben hadn’t touched, and his assistant’s name is Mary Jane. Weed bags appeared and disappeared: what more could you ask for?

As it turns out, there’s so much more: Mary Jane was a sexy blow-up doll, and someone’s phone ended up in a box of mac and cheese. I would go on but I don’t want to spoil anything. Let’s just say my expectations went up in smoke as about 50 people in the audience, including myself, laughed, cried and gasped.

While I can’t speak for everyone else in attendance, I can say with confidence that the laughter didn’t just result from smoking a fat bowl beforehand.

It’s 2022 and theoretically anything goes in New York City. Then how come no one else thought of bringing these two together? I met Zabin after the show to see how he made it work. While he wouldn’t reveal his secrets, he was adamant that a love of magic and a passion for weed would be a great inspiration.

Growing up in the tri-state area, Zabin did his first magic trick at age six after receiving a kit for the holidays. It was love at first touch. A decade later, he fell in love with cannabis again. Within a few years he had left college to do magic full-time.

But not everyone can be Cris Angel, so he started selling weed on the side. Eventually he started playing regular gigs on cruise ships and even toured with the US Navy (he says stoners are a much easier crowd).

“I was very shy growing up and I was terrible at sports. Magic was one thing I was good at. It’s been a passion – my whole life,” he tells Leafly. “I started out hosting birthday parties and then moved on to private adult events and the competition circuit. It just grew [into a] career.”

Within a few years he had left college to do magic full-time. But not everyone can be Cris Angel, so he started selling weed on the side. Eventually he started playing regular gigs on cruise ships and even toured with the US Navy (he says stoners are a much easier crowd).

During the pandemic, having nowhere to perform, Zabin moved to Portland, Oregon and began working on a weed-centric magic show, something that was on the back burner. He launched it in May 2021 and began performing weekly.

As pandemic restrictions lifted, he began touring in health and recovery states including Oklahoma, Montana, Alaska and soon even Canada.

“People have no idea what to expect! I really love that it appeals to so many different demographics,” he says, not unlike a 21st-century Woodstock.

There were classic tricks like “Is that your card?” and lots of audience engagement. I got crammed into a bit myself when I pulled a gift certificate from a stack that magically appeared in the drawing Zabin was making in real time on stage. (It was H&M)

But all the personal details aside, Zabin has clearly been in the game long enough to anticipate and subvert magic show clichés. On numerous occasions, the article in question appears to be incorrect. But as we quickly learned, this becomes another layer of trickery when Zabin emerges victorious.

With performances in Brooklyn every weekend throughout October, Zabin’s goal is to give Smokus Pocus a permanent home in the Empire State. New York’s upcoming adult market means he could pull all sorts of possibilities out of a pocket, ear or grab bag. In the meantime, be sure to check out the list of dates and cities he has planned for December.

“It’s an exciting pinnacle of this burgeoning industry – an intersection of entertainment, cannabis, community and culture. Everyone comes together for a magic show!”