For the past 420 years, the Colorado government auctioned license plates with 14 cannabis-themed designs with words like BONG, GANJA, STASH, and ISIT420 to name a few.

For any stoner reading this, the obvious reaction is, “Hell yeah!” However, this is not the case for all.

A recent article by Krista Kafer, published in the Denver Post, in which she referred to this case and classified it as “glorifying cannabis.”

And when you think of license plates that read “ISIT420” it may be a little “glorifying” from the government. I mean, we don’t have a “LETSDRINK!” Are we doing license plates now?

In the following article we will analyze the points Krista raised, which, to be fair, are not entirely “wrong”. I actually agree with her on the train of thought, “Why did the government sanction license plates for weeds?”

If you want to argue, argue with facts!

The beginning of the article starts off in a weird way – not like most articles. Here is the intro paragraph.

“Do you know what is today?” A 13 year old blurted out during science class. “It’s 4/20 and you know what that means.” Several boys nodded and giggled. “Yeah, THC is cool,” said another student. When I suggested something else, one student remarked, “It’s better than drinking.”

That surprises me. Why is a woman like Krista, who is at least 35 to 40 years old, on a science class with 13 year olds?

I know some of you would say, “Reginald, she’s using pictures to prove a point …” except in the next paragraph where she starts …

I’m glad to hear that kids today have embraced the marijuana industry’s marketing material because that’s what impressive and vulnerable eighth graders need – the glorification of cannabis. Kudos to the Colorado state government for reinforcing the “THC is cool” message last week.

Then what, internally, at least – lets you conclude that these hypothetical 13-year-olds who sound creepy like Beavis and Butthead – are real.

But they are not, this conversation never took place! Also, a 13-year-old will never say, “It’s better than drinking …” because how would a 13-year-old know if he wasn’t drinking or smoking marijuana?

After Krista started her fictional teenagers talking about weeds like a bad ’90s cartoon, she cited some “research” on how cannabis use can have “neurotoxic effects on teenagers” and so on.

It goes so far as to say that those who smoke cannabis are not “top graduates” or “have good careers”. This looks eerily familiar in the DARE era, where inflated fear tactics are used to influence public opinion on cannabis.

The first study she cites is from 2012, in which the researchers tracked data from people born in 1972/1973 up to the age of 38 with 4 interviews about their cannabis use.

In this study, the researchers found a decrease in a “neuropsychological” factor in cannabis users – even after years of control.

What the study did not fail to adapt, however, is the myriad of other factors that have significant neuropsychological effects on an individual’s life.

In other words, do the scientists believe that alcohol, tobacco, high levels of stress, poverty, poor family dynamics, other drug use, genetics, etc. have no effect on IQ or cognitive performance?

Because while they controlled for “years of education” they didn’t control any of these other factors, and it might very well be because 95% of all cannabis research has the green light to find out if it’s bad for you.

When you see that the researchers had to justify their grants, you can see that their science is shaky to say the least.

Marijuana is for losers!

Another fun thing Krista points out is that “data shows” that cannabis is mainly used by “low-income, poorly educated men,” according to the Colorado Department of Public Health.

Interestingly, while linking the previous studies, this claim was not linked in any way. After trying to find the source of this claim myself, I came up empty-handed. I’ve looked through several reports from the CDPH, but still – nothing.

Where is this information that you quote from Krista? How do you know “stupid men smoke weed?”

There is a lot of smoke again, but no fire when it comes to forbidden rhetoric.

Let’s not move on to obliterating Krista’s position and focusing on what really matters – the kids!

Finally, their fictional introduction painfully reminded us of the main premise of the article – “The children!”

I believe it was irresponsible for the government to issue cannabis license plates – regardless of the cause – to raise money for public goods. The government should always remain neutral no matter what, and we shouldn’t glorify “stoned driving”.

But beyond that, it’s about educating people about drugs.

Our current approach is to scare people with things like “IQ anxiety” and “psychosis,” but for the vast majority of people who smoke, this will never happen.

And because it will never happen, people are questioning the rhetoric that the state is promoting. “If weeds aren’t as bad as they say – maybe heroin isn’t either!”

Besides, heroin is a very hard substance that should only be used to treat the most severe pain, such as surgery or the like.

Proper education is the key!

The only thing I realize is that Krista is not trying to get rid of cannabis, but – she wants to end the glorification. I agree with her that the government shouldn’t be for or against – it should only act as a law enforcement mechanism.

My internal anarchist just flinched as I wrote this paragraph!

However, in order for society to develop further, we have to deal with drugs differently. We have tried to eradicate drugs with guns and chains for nearly a century when all evidence points to the failure of such an approach.

What we need to do is start properly educating people about “drug culture”. We need to let people know that “the vast majority of people try things, but few get addicted”.

We need to educate people about the reasons people use drugs and whether there is any value in that action. For example, a “low-income person with limited job opportunities” is likely to live in “an elevated state of stress” in fear of where their next meal might be coming from.

Kat Williams said it best, “If you don’t have a job and don’t smoke weed, I don’t know what the hell you’re doing with your life.”

And that’s true to a certain extent.

However, most people resort to it because they lack internal coping mechanisms to deal with external pressures. Weed, gives them a bit of relaxation, and often times – at that moment of peace the mind can figure out what the next step is.

I ask the stoners who read this – did weeds ever help you out of a difficult situation by allowing you to step away from the problem and look at it from a new perspective?

Chances are you were saved by Jane.

We don’t need to teach people how to “not” use drugs, but rather how to use drugs responsibly. After almost 100 years of banning drugs, the data clearly shows: “No matter what you do, people will use drugs!” 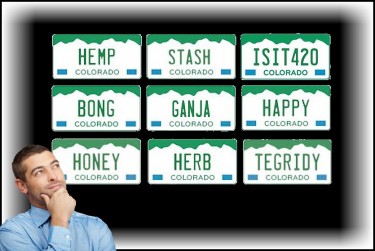 WHAT IS THE BET WEED LICENSE PLATE? COLORADO BIDS AT AUCTION!