Does cannabis boost your immune system or weaken it?

Cannabis is a special natural plant that contains cannabinoids, terpenes and flavonoids. The cannabinoids embedded in the cannabis plant give it a certain medicinal quality. This has sparked the growth of medical marijuana in different regions of the world. Marijuana is popularly used to deal with pain, seizures, insomnia, mood disorders and so on. These medicinal properties are due to cannabis’ relationship with various human body systems.

THC, the main cannabinoid in cannabis, can promote its intoxicating effects as a recreation in most cases. The cannabinoid is also important for medicinal effects on pain, nausea, insomnia and decreased appetite. CBD is the second most important cannabinoid, although it is not intoxicating and its effects are important in conditions such as epilepsy and anxiety. The cannabinoids and others interact with the endocannabinoid system in the body to affect most of their medicinal effects, either directly or indirectly. The entourage effect of these cannabinoids has powerful effects on the central nervous system, digestive system, circulatory system, respiratory system, and immune system.

The immune system is a specialized system made up of cells, endogenous chemicals, and organs that protect the body from pathogens. The system fights off infection and maintains homeostasis in the body for proper functioning. Suppressing the activities of this system therefore opens the body up to more infections and diseases. In the same way, improving the system’s activities will also help to better protect the body from unwanted pathogens and infections.

First of all, it has to be said that the subject of the effects of cannabis and the immune system has only been researched to a limited extent. There is therefore a need for further research on this topic. Nevertheless, we must be satisfied with what is available and draw conclusions from it. The available evidence currently suggests that cannabis has a suppressive effect on the immune system. This means that the activities of cannabinoids weaken the immune system, making the body more susceptible to contagious infections. Oddly enough, this news welcomes people with autoimmune diseases like myasthenia gravis. However, people with a functioning immune system may not find it as soothing.

It was previously established that the endocannabinoid system (ECS) is an important medium through which cannabinoids affect human body systems. This also applies to the immune system. The ECS acts as a gatekeeper for the immune system to limit the development of inflammatory responses that lead to disease. They also play an important role in influencing the functions of the immune system cells. Literature has shown that CBD and THC suppress the immune system through CB1 and CB2 receptors. Some studies have also found evidence that THC alters immune cells responsible for antimicrobial activity.

The effect of cannabis as an immunosuppressant has two sides. It might be just what the doctor ordered in some cases, while in others it does more harm than good. A 2003 study showed this effect when healthy volunteers were tested to see the effects of cannabis on the immune system. High levels of anti-inflammatory cells and fewer pro-inflammatory cells have been found in the systems of cannabis users. This means that regular cannabis users have fewer killer cells in their immune system. This means that regular cannabis users are less resistant to the spread of tumors and microbial infections.

Further analysis of the study results also showed a significant association with cannabis as an immunosuppressant. There was a dose-dependent relationship to effect in the outcome of the patients in the study. This means that the longer cannabis use lasts, the higher the suppressive activity of the immune system. Therefore, regular cannabis users are more susceptible to microbial infections than occasional users.

Therefore, people undergoing chemotherapy may not find these effects of cannabis helpful. Its effects as an immunosuppressant means everyone has fewer infection-fighting cells, which is bad in the long run. However, patients with HIV have a different case with cannabis as an immunosuppressant. Studies have shown that cannabis helps treat HIV by increasing CD4 cell counts. These cells are used as markers to measure the robustness of immune cells against HIV. Cannabis also helps reduce viral loads and promotes maintenance for HIV patients.

Cannabis has a particular effect on the immune system and the nature of this effect is suppressive. This immunosuppressive effect is important for patients with autoimmune diseases. However, it is less helpful for patients with functioning immune systems. The reason for this is that such functional systems are important to reduce the likelihood of microbial infections. They are also not helpful for patients undergoing chemotherapy as they further reduce the number of infection-fighting cells.

MORE ABOUT CANNABIS AND THE IMMUNE SYSTEM, READ MORE… 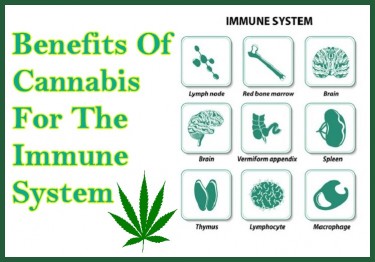 CANNABIS BENEFITS ON THE IMMUNE SYSTEM, READ THIS!