Baked at the Dentist – More than 50% of people go to the dentist Stoned?

Baked at the Dentist: Dentists claim half of their patients are high from weed

Half of dentists say patients are high on marijuana or another drug at dental appointments. from EverythingScience

Nobody likes going to the dentist. This is a universal certainty like death and taxes. There are many reasons why we don’t enjoy going to the dentist, whether it’s because we know we’re going to have to undergo excruciating nerve work or simply the fact that another human being is about to shove their hands into that gaping hole in your face, to reveal just how bad your dental hygiene really is.

Perhaps this is why, according to dentists, practically half of the people who go to the dentist’s office are stoned.

As personal and medical marijuana use rises nationwide, the American Dental Association (ADA) is suggesting patients avoid using marijuana before dental visits after a new survey found more than half of dentists (52%) reported that Patients came to appointments with high levels of marijuana or another drug.
SOURCE: EUREKA ALERT

That’s right, according to dentists, more than half of the people who come into their office are stoned. Perhaps this is due to the fear that a visit to the dentist’s office causes in a person. And while this may seem like a harmless thing, the fact is that cannabis use can interact with the medications they give you at the dentist’s office.

This is because a high standard of dentistry can limit the care that can be provided. The survey of dentists found that 56% said they limited treatment to patients who were high. Due to the effects of marijuana and anesthesia on the central nervous system, 46% of dentists surveyed said they sometimes need to increase anesthesia to treat patients who require care.
Source: EUREKA ALERT

In the US, the dentist could be held liable if something goes wrong. Because of this, they choose to turn patients away if they find they are high at the time of their visit. This is because, for some reason, cannabis users can tolerate more anesthesia than non-cannabis users.

Perhaps because cannabis users have learned to “get high” and act consciously while under the influence of THC, they can be more “present” despite the drugs when anesthesia kicks in. However, in a “surgical” or “dental” setting, this is not ideal.

The whole idea of ​​smoking before the dentist’s office is to “reduce pain,” but if it increases your tolerance to the anesthesia, it would defeat the purpose.

I personally prefer to get a good high before going to the dentist. You can relax a little more, you’re not that nervous about what’s going to happen.

Of course, if we are talking about major dental work – then perhaps using CBD would be a better option. There is no real research on the effects of CBD on anesthesia. However, the vast majority of institutions recommend abstaining from any substance prior to surgery or anesthesia.

This warning does little to stop people from smoking weed before going to the dentist as the world becomes friendlier towards cannabis and cannabis-related products.

However, according to the article, dentists say that “cannabis users tend to have more tooth decay,” partly blaming “The Munchies,” which they believe is a medical term.

Cannabis jokes aside, I’d love to see the science on all of this. According to the article, there were “studies” but none of them were linked, so I couldn’t tell which ones they refer to.

Still, everyone knows that everything we do has some kind of consequence. Everything we eat, the hours we sleep, whether we exercise or not – everything affects your well-being.

Some activities have a greater impact on your physical and mental health, and while cannabis is certainly not exempt – it’s far less harmful to your health than alcohol or tobacco. That’s not to say it’s “harmless.” When you inhale smoke, you are causing some kind of damage to your body, regardless of whether it is natural.

However, most cannabis users are unaware of this fact – they understand the “risks” involved and continue to smoke anyway. This is a personal choice, much like someone deciding to have a few beers while hanging out with “the buddies”.

Nonetheless – if there is a real link between cannabis use and higher tooth decay, then there may be a new market for cannabis-infused toothpaste – you can get high while battling stinky breath!

I’m sure some form of CBD-infused toothpaste already exists, but oral sprays, chewing gum, etc. can all be highly marketable products in a legalized cannabis market. Stoners like to get high, and they don’t like going to the dentist, so if you can invent a product that gets you high and avoids going to the dentist, you’re the “hero we didn’t know we needed…”

If you’re going to gulp down some sugary treats, the least you can do is brush your teeth and remove any residual sugar from your mouth so it doesn’t attack the enamel. Maybe prepare healthier snacks too.

You know the cravings will eventually get you – with a little preparation, you can create an arsenal of healthy snacks to satisfy the beast, but also boost your overall health and well-being.

You probably go to the dentist stoned…

From what you have just read, I can almost guarantee that you will actually go to the dentist stoned. Come on – be honest! i know i will

The fact is, going to the dentist sucks. Maybe if they tickle your balls a little before poking holes in your head while conversing with you, knowing there’s no way you’ll be able to answer coherently if your life depends on it; If only we could find a way in our hearts to go to the dentist sober.

But like me, when I know I’m “sinking,” I have to “get over” the initial mental trauma first; I know you’ll probably take a hit before you get drilled, too. 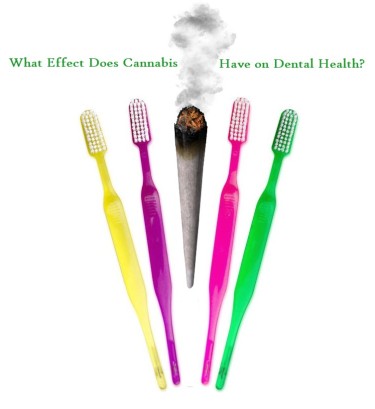 DENTAL HEALTH AND WEED WHAT YOU SHOULD KNOW BEFORE YOU SMOKE!