According to a new Gallup poll, every demographic in America wants cannabis legalization except for older conservatives and churchgoers

With just two exceptions: those who attend weekly church services and older conservatives aged 50+, nearly every demographic, comprising 35 sub-groups broken down by ideology, religion and age, supported the legalization of cannabis in the United States.

A week after two more states legalized recreational cannabis in midterm elections, Gallup’s poll shows popular support has remained high. The pool showed that 68% of Americans say cannabis should be legal, versus 31% who believe it should remain illegal.

Support has remained steady since the research firm polled the topic in 2021 and 2020. However, opposition fell by 1% from 2021, with 1% admitting to having no opinion on the issue. The poll, which polled 1,009 Americans between Oct. 3 and 20, also shows growing bipartisan support for cannabis reform.

Those with no religious bias led the list at 89%, followed by liberals (84%), Democrats (81%), young adults (79%) and those who rarely or never attend religious gatherings (78%). The only groups that did not favor legal marijuana by a wide margin were those who attended weekly church services (46%) and conservatives (49%). However, young conservatives between the ages of 18 and 49 were mildly in favor of legalizing marijuana. Baby boomer conservatives, however, are a different story.

Protestants and Catholics each expressed 60% of their support for marijuana legalization. Higher education seems to make opinions more positive about cannabis: Graduates support legal marijuana compared to non-graduates with support of 69% and 66%, respectively.

According to the company’s most recent report, a person’s educational level and geographic region of residence are two criteria that don’t have a meaningful association with opinions about marijuana. A poll analysis by Jeffrey M. Jones confirmed that Americans have become significantly more supportive of cannabis legalization over the past two decades. Still, support appears to be leveling off for the time being and has not shown any increase over the past three years.”

Young conservatives and moderates are more likely than their parents to believe cannabis should be legalized. As a result, support for marijuana legalization can be predicted to increase in the coming decades as newer, potentially more pro-marijuana generations succeed previous generations in the US population.

The growing support of legal pot

Gallup polled Americans on cannabis legalization as early as 1969, when only 12% said they opposed prohibition. Since then, support has gradually grown, and it has increased significantly in the years since states legalized marijuana.

Gallup did something different this time around to provide more robust statistics, particularly where different demographic categories fall into the topic. The company examined the aggregated results over five years of the survey, from 2018 to 2022.

Specifically, the analysis finds that are young adults (79 percent), self-proclaimed liberals (84 percent), those with no religious preference (89 percent), Democrats (81 percent), and those who rarely or never attend church services (78 percent). Subgroups whose support for cannabis legalization exceeds the national average in the polls by 10 points or more.

The article also reports that groups whose support is at least 10 percentage points below the national average include weekly churchgoers (46%), conservatives (49%), Republicans (51%), older people (53%), and Hispanic adults (56%). “

According to a statistical analysis, which simultaneously takes into account the influence of numerous factors of the respondents, the most important determinants of attitudes towards marijuana are ideology, religiosity, age and party identification. According to the model, doctrine has a greater influence than the other variables.

Collective results of the Distinct Survey

The information collected included a sample of 5,412 interviews with Americans with a margin of error of just +/-1 percentage point.

The poll’s results and demographic trends are similar to previous polls on the topic, including one sponsored by Fox News and the Associated Press. The poll was conducted in the run-up to the election, which found 63 percent support for statewide marijuana legalization.

Surprisingly, the poll showed broad public support for full legalization among voters in two states who opposed cannabis legalization measures last week. This implies that efforts have failed in part because of differences in specific elements rather than the overall concept of legalization.

According to a recent poll, most Americans support President Joe Biden’s decision to pardon people convicted of federal convictions for marijuana possession. The majority also want their governors to follow suit with a provincial cannabis amnesty soon. According to another recent poll, most Americans don’t believe marijuana is dangerous, despite attempts by the legalization opposition to paint the plant in a bad light.

Referring to Gallup, the organization released additional statistics in August showing that more than twice as many Americans believe cannabis benefits their consumers and society as much as alcohol. This is broadly consistent with the findings of another study published in March. The survey found that more Americans believe it would be beneficial for individuals to switch to marijuana and drink less alcohol, as opposed to those who believe that drug substitution would be harmful.

Surveys show that cannabis use in America normalized many years before previous generations. Time is running out for generations to resist legalized marijuana, which is shrinking every year. Young conservatives increasingly championing legalized marijuana are crowding out their older counterparts. Finally, the effect becomes clear at the ballot box. 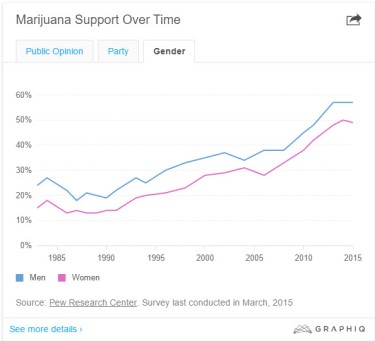