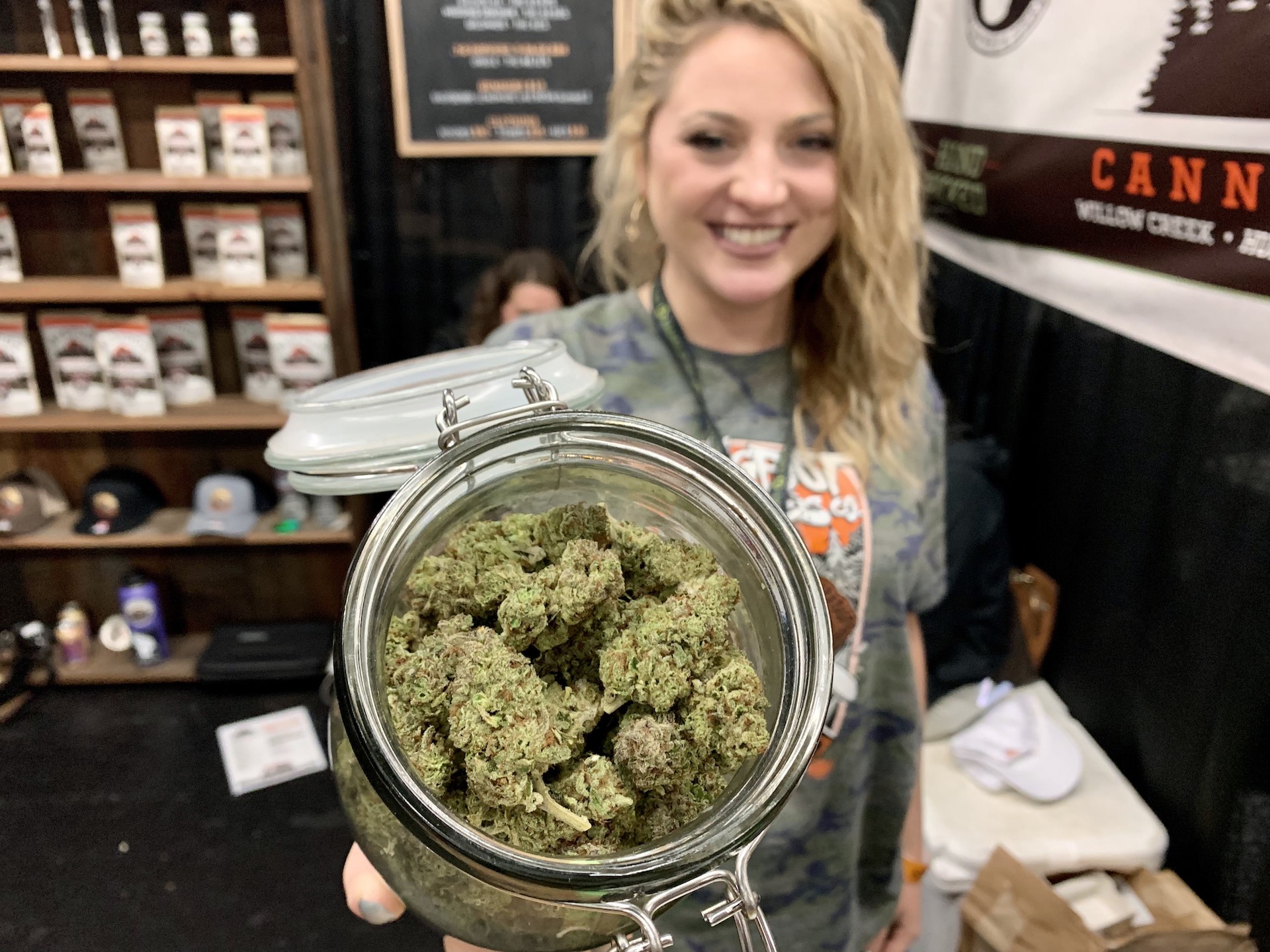 Future Oscar winners make their debuts at the Sundance Film Festival. Unicorn startups are born at SXSW. And NFL superstars make their mark in the draft combine. For licensed and unlicensed cannabis professionals, the path to glory leads each year through the Emerald Cup. The Cup is the world’s penultimate pro-sumer cannabis fair and smokeout.

Humboldt, Mendocino, and Trinity counties combined produce more weed than any other place in the United States. Every December, super growers, vendors and users descend from the Emerald Triangle to swap fresh genetics and search for the next superstar strain of the year.

In 2023 you will smoke the strains that premiered on December 9th and 10th in Santa Rosa, California. The event is further proof that the future is still going to be Cali first: here are 10 trends from the 2022 Emerald Cup Harvest Ball coming soon to a state near you.

Lots and lots of $20 eighths of fuego and $30 grams of rosin were scattered across the cup. (Photo courtesy of The Emerald Cup)

Legalization lowers the pot price by 90% over the long term. This is disruptive to farmers, but life-changing for medical patients and consumers. Six years since Californians passed Prop 64 and four years since sales began, prices have returned to medical-era levels and lower while supply is tested and taxed. We saw 160 ounces of delicious indoor Lemon Cherry Gelato or Georgia Pie x Z. Clean, hyped dabs were $25 a gram at globs. That’s tax included. The downside is a top shelf that keeps getting higher. RS54 Wizard Trees clones fetched $500 per cutting. So does OZ Kush 3rd generation Fam seed packs. One customer bought $5,000 worth of seed packs at once.

The drop in cannabis price not only opens up inexpensive rosin options, but also opens up a whole new world of cannabis terpene-derived experiences. Like scratch and sniff labels on weed bags and postcards. Humboldt Seed Co brought the technology to market six years ago, but cheap cannabis terpenes made it possible for her to break through. More on scratching and sniffing later this week.

The variety of flower products is exploding

We saw new combinations of old and new things – things we couldn’t have imagined. Legalization opens everyone’s Seed Vault and they brag. Compound Genetics made noise with their gastro pop buds and seeds. Ember Valley’s new Grapefruit Zlushie has us juiced. Breeders like Equilibrium Genetics aim to eliminate bottlenecks in pot genetics by imparting tropical landrace vigor and vigor to inbred lines like Gelato or Runtz. Home growers and sellers from all over the world came with heaps of cash hoping to buy a lottery ticket seed.

Hash holes will take over the common market

The Natura team behind Fidels, Dee Thai Gummy Bears and Sluggers knocked this year’s Harvest Ball out of the park. (instagram)

Time to learn a new language. A joint with a large rosin worm in the middle is called a hash hole. They went for $50 a piece at the booth of Fidels – a hashhole pioneer. Instagram means everyone has a front row seat to the hashhole revolution and now is the time to step in and bring something new and outrageous to your local market. Thanks again to the cheaper weed prices that have made these delicacies affordable for the common man.

License sales and consumption are dialed in

People have an inalienable right to assemble, and that includes weedheads. Santa Rosa, California in Sonoma County allowed thousands upon thousands to shop and eat without incident. Legalization means no one goes to jail for a plant. Santa Rosa police officers walked through the festival without stressing anyone. There were no drunk fights. It’s not even legal in the city of Los Angeles. But it’s inevitable.

Vintage flavors are back with a vengeance

A cannabis cutting (aka clone) from Phinest is set to fuel a new wave of Thin Mint hybrids, and we’re here for it. (Photo courtesy of The Emerald Cup)

The flavors of the 80’s and 90’s are back, like Doc Martens and baggy denim. We saw NYC Piff and Legend OG sell out in under an hour on Day 1 at Purple City Genetics. Phinest sold clones of Thin Mint, Lemon Tree, and the Green Crack cross Green Ribbon.

One of Compound’s leading breeders told Leafly that OG gas flavors are coming back strong in 2023 thanks to demand from both consumers and tastemakers. And don’t sleep mad. East Coast heads reportedly grabbed all the sour diesel seeds they could find on day one, seeking the nostalgic, uplifting high of the old days over the current tide of Zaza.

The latest weed strains came straight from tissue culture in scientific vials. This cannabis stem cell technology is set to take over the industry and cure the cannabis world’s COVID known as latent hop viroid. Node Labs gave out vials of ganja gold, suggesting a homegrow movement is swelling.

Wild new flavors that take off

Pink Certz on display at the Sense booth. (Courtesy of The Emerald Cup)

The pace of weed cultivar development is accelerating, and the life cycle of a cultivar can now be as little as six months. Get ready for a new wave of lemon cherry gelato crossovers in 2023 and some cooler stuff to come. Rainbow Sherbert 11 clones went for $500 at Wizard Trees and we expect this OZ Kush strain project from Deo Farms to take over the nation in 2023. Read about it in the January issue of Leafly Buzz.

Cookies’ New York partnership with GUMBO is another example of the power of social influence in this area. On Saturday, GUMBO owners Luka Brazi and Alex Majors held court in front of the cookie blast tent, spreading love and pushing their NYC-inspired Madison Square GUMBO. In a few weeks, the GUMBO brand is slated to hit the New York market, putting cannabis-convictioned operators one step ahead of other companies. As a result of New York’s social justice laws, Brazi, Majors, and other legacy operator Branson will be keys to cookie penetration in New York.

Not everyone survives the transition to licensed, taxed adult sales. You have to be excellent, efficient, happy and madly in love with weed.

The Emerald Cup had fewer booths than in previous years, but the booths were larger and Boof was nowhere to be found. Weed is better than ever. And the industry is full of creative and caring people working hard to keep the world going with quality bud. Price compression is not limited to the legal side. Your local dealer will also feel the price pressure; if they haven’t already.

The Bay Area legend drew a monster crowd to Santa Rosa on Saturday night. He also brought with him cultural diversity, which the region and the industry can always use some help with. Any grower will tell you that variety produces stronger, more vigorous plants. And the same seems to be true of brands collaborating with influencers like E-40 to attract fans who would otherwise never make the trip to Santa Rosa in December.

And those are just some of the big trends emerging from the epicenter of California cannabis culture. Start saving your ducats and join us in LA west for the Emerald Cup Awards show in May or in cold, rainy Santa Rosa in December 2023.

Check out Leafly’s exclusive snaps from the celebrations below.

Calvin Stovall is Leafly’s East Coast Editor. He is an Atlanta-based writer, producer, and journalist whose work has appeared in Complex, HBO, XXL Magazine, and other publications.

David Downs leads news and lifestyle coverage as California Bureau Chief for Leafly. He is the former cannabis editor of the San Francisco Chronicle and the author of several cannabis books.

Check out the articles by Calvin Stovall and David Downs