The steaks have never been higher!

There are always invisible consequences of everything we do. Regarding the legalization of hemp in 2018, one of those consequences is beginning to manifest itself. Before we continue, I want to dispel the notion that “consistency” is a bad thing.

On the contrary, consequence is just the word for “cause and effect” in this context. As mechanically as possible.

Studies are currently underway to see the effects of hemp-based animal feed on the by-products of these animals. For example, does THC pass into cows’ milk after being fed hemp? If yes, is it significant? What are the mass implications of the results?

All of these factors would determine whether something could be “hemp-fed.” Perhaps THC-enriched cow’s milk could be a product you can buy in the next 10 years. “Hemp-fed beef” could potentially be sold as “super beef” because it’s “naturally packed with phytocannabinoids”!

Of course, these latest proposals are a by-product of my imagination — but it’s not as far-fetched as it seems.

In today’s article, we’re going to look at what scientists have discovered about feeding hemp to dairy cows, and what it likely means for the “hemp-fed dream” right now.

Published in the journal Nature Food, a team of German researchers began conducting some experiments on dairy cows to see what effect feeding different potencies and amounts of hemp would have on them.

Researchers analyzed the effects of feeding hemp-containing forage to 10 milk-producing dairy cows. They used two different strains of hemp in the experiment, both of which contained less than 0.2 percent THC – below the legal limit in the European Union – although one had a much higher concentration of cannabinoids overall.

The scientists then analyzed the milk, blood and faeces of the cows, evaluated other physiological factors and observed their behavior.

The team found that feeding the cows up to 0.92 kilograms of industrial hemp with a very low concentration of cannabinoids per animal per day had no noticeable effects on the animals’ health.
SOURCE: NewsWeek

While the researchers looked at blood, feces, and milk specifically for “cross-transmission of cannabinoids,” they also didn’t look at the animal’s entire “lifespan.” They only investigated whether the phytocannabinoids can be passed on through the cow.

At low doses, there doesn’t seem to be any noticeable difference. However, if you can remember Thai farm that switched to hemp feeding their stock Instead, they made their breeds healthier and more appealing to consumers.

If there is an overall improvement in health then any potential ‘cross transmission’ could be permissible due to the health benefits of the feed. Of course, as many scientific studies say – “More research is needed…”

But the results showed that cows were fed a diet 0.84 or 1.68 kilograms of a cannabinoid-rich industrial hemp strain showed behavioral and physical changes. These included increased yawning, salivation, restless movements, nasal discharge, pronounced tongue play and reddening of the nictitating membrane – in some animals a transparent third eyelid – as well as other effects.

“We observed significant changes in respiratory rate and heart rate, as well as a reduction in feed intake and milk yield,” Robert Pieper, an author of the study who works at the Berlin Federal Institute for Risk Assessment, told Newsweek.

The researchers observed changes in feed intake and milk yield from the second day of exposure to the cannabinoid-rich industrial hemp. All observed changes disappeared within two days of stopping the hemp feeding.

Analysis of the milk produced by the cows showed that a Transmission of cannabinoids, including THC, from hemp to dairy had taken place.
SOURCE: NewsWeek

In other words, the scientists managed to blitz Daisy the Cow. So quickly that cannabinoids made their way into the milk and then into the meat.

This effect only lasted about two days before the cow returned to normal. However, it’s safe to say that these cows have a deeper respect for Marley after graduation.

These side effects relate to the behavioral changes they observed in the cows. They have not conducted studies on the subsequent transmission of cannabinoids when humans consume the milk.

Some people may opt for cannabinoid-rich meats and dairy

On Reddit, as expected, people reacted differently than the scientists — who cared more about public health.

In THIS THREAD about the results, there was an exchange between the original “TricksterWolf” poster and other Redditors.

TrickterWolf: True item: The cows were stoned. They also made THC-contaminated milk.

BIH marathoner: You say spoiled, I say amplified.
Dobryden22: No lie, if you could control the dosage this would be the best milkshake of my life.

TricksterWolf: My milkshakes bring all the boys to the yard, and they’re like; “Why does my hand have so many fingers”
SOURCE: REDDIT

While the conversation erupted into plenty of cannabis puns (some of them hilarious, by the way), the underlying message remains true. There is a market for “cannabinoid enhanced” products. Not infused, but part of the digestion and physiology of the animal itself.

We know there is more interest in “hemp-fed poultry” in Thailand, and given that hemp was a staple of animal feed for centuries prior to banning, there’s a chance this could be something “real” that’s foreseeable Future.

Unfortunately, that future will not be next year. Until cannabis is completely removed from the CSA, there will always be political opposition. One would think that in 4 years since hemp was legalized they would have had more research on the subject – however, it took the scientists in Germany to make some major advances in this area.

Some progress is still being made…

While there’s still a lot of resistance at the federal level, places like Colorado and Washington were way ahead of the game. They’ve had studies on these very elements for some time. Farmers who have switched to hemp have noticed a noticeable difference in their livestock – and are wondering why this isn’t national yet!

As the HFC states on its website, “The path to ingredient approval for hemp and its by-products is time-consuming and complicated.” According to the group, there are two different ways hemp ingredients for livestock feed can be approved by the federal government. Firstly, through a new ingredient definition via the AAFCO (Association of American Feed Control Officials), a voluntary organization of local, state and federal government agencies. There is also the filing of a Feed Additive Petition directly with the FDA’s Center for Veterinary Medicine (CVM).

“We cannot get legal approval from the legislature,” Buffington noted. She added that HFC is working on adopting a new definition of hemp seed cake so that it can be used as feed for laying hens and as an application for hemp seed cake and meal for ruminants. That first application will be submitted to AAFCO this month and then to CVM. Buffington said it will take time.

“Lightning speed for a proposal like this for a new ingredient definition is two years,” she said. “The typical time to go through the entire FDA/CVM process is four years. But AAFCO and vets support our efforts. We hope that we can meet this two-year approval.”

Buffington’s projected timeline is consistent with statements from other industry players. In a recent Hemp Market Insider report on the US hemp grain market, we found that one processor said he believed it would take three to five years for hemp grain to be approved for animal feed.
SOURCE: HEMPBENCHMARKS

As you can see, there are many obstacles to passage, but a general timeframe of three to five years is reasonable given that it only took 55 years to end illegal cannabis prohibition

J HISTORICAL TIMESTAMP Y: At the time of writing this article, it is still not legal at the federal level.

Still, there’s no indication that this won’t be approved at some point in the future, and so it’s safe to assume that “Hemp Fed” will become a category around that time. If the hemp feed helps keep the animals healthier, happier, and more resistant to disease, there should be a net benefit to society once approved.

Of course there are people who want to take beef production out of the equation entirely – but maybe the beef can eat up the leftover hemp so we can rather work in harmony with how nature works – cycles and dependencies and what not.

Nonetheless, it’s an interesting time to be alive. Cows get stoned for science! 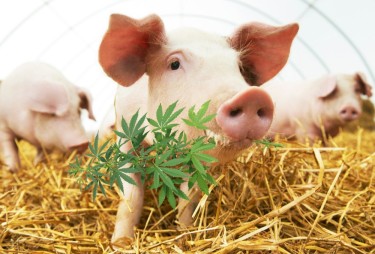 A PIG, A COW AND A DONKEY EAT CANNABIS, WHAT HAPPENS?