The 2023 Farm Bill – What Could Change for CBD, Hemp-Derived Delta-8 and 9-THC, and FDA Regulations?

Industry experts are urging Congress to regulate CBD and hemp-derived compounds in the 2023 Farm Bill. What will the FDA do about CBD in edibles? Will hemp-derived psychoactive delta-8s and 9s be banned nationwide, or will the new 1% THC limit help the market explode to new heights? Curious people want to know!

Since the inception of the hemp industry four years ago, one thing that has continued to negatively impact the market has been the FDA’s inaction in regulating hemp-derived cannabinoids and products.

In 2018, the United States legalized the cultivation, possession, and sale of hemp through the Farm Bill. Subsequently, the USDA established regulations for hemp production; However, the 2018 legislation is due to expire by 2023. (The legislature must renew the bill every five years). This means that the FDA has prevented significant growth in the hemp industry by failing to regulate hemp-derived compounds. Industry stakeholders, as well as concerned advocates, are trying to prevent this from happening again if the bill is amended in 2023.

On July 2, Congress held a hearing titled “An Examination of the USDA’s Hemp Production Program” to examine various ways the 2018 law could be improved to improve hemp production by 2023. Eric Wang – CEO of Ecofibre and Vice President of the US Hemp Roundtable (USHR) and Ryan Quarles – Commissioner of Agriculture in Kentucky.

At the hearing, Wang and Quarles spoke. about the FDA’s lack of regulation for CBD and hemp-derived compounds and how this is hurting the industry. Both urged committee members to include much-needed language in the 2023 Farm Bill to automatically regulate CBD and several other hemp-derived products. That way, the industry would have no reason to wait for the FDA. The majority of those present at this crucial hearing agreed with her point of view.

During testimony, Quarles stated that the Food and Drug Administration’s delay in compiling a set of rules and regulations for hemp cannabinoids, specifically cannabidiol, was disappointing. The hemp industry supply chain needs clear direction from the FDA regarding hemp-derived products before stakeholders can develop and manufacture useful CBD-related compounds. This is currently a gray area; hence, many business leaders are unwilling to take a step. This has resulted in very low demand for harvested hemp plants and materials.

When the Farm Bill passed in 2018, Congress assured the public that it would support the cultivation and sale of hemp plants and hemp-derived compounds. This announcement spurred thousands of farmers across the US to grow hemp on a medium and large scale. Hundreds of thousands of acres were used just for FDA officials to announce that it was illegal to sell indigestible hemp compounds. These public pronouncements by the FDA took a huge toll on the industry as CBD trading and investing resulted in losses. Since then, the industry has been chilled due to a lack of favorable action at the federal level.

Jim Baird, representative of the ranking member, commented that the FDA is yet to have a framework to regulate hemp-derived cannabinoids. He stressed that Congress had heard various recommendations for the amended law and promised to continue discussing these great solutions.

Committee Chair Stacey Plaskett wholeheartedly agreed that the FDA’s inaction would need to be rectified over the next few months.

Further concerns due to FDA inaction

Many people, including Wang, have warned that the FDA’s inaction continues to put millions of Americans at risk. Poorly regulated CBD products endanger people’s safety and health. In recent months, the number of hemp products advertised as intoxicating has increased. Consumers rarely research these products further before purchasing and consuming them.

Wang rightly noted that farmers are not the only ones suffering from this regulatory uncertainty. Customers are also affected. Offensive individuals mislead consumers by providing false information on product labels and selling products without proper precautions.

To make matters worse, concerned farmers and business leaders have begun manufacturing and selling intoxicating products like Delta-8 THC. The US Hemp Roundtable found that many issues in the industry are more complicated than ever. Minors are also at risk.

With a clear regulatory path for CBD through the U.S. Food and Drug Administration, it will ease the economic pressure on the ongoing product bullshit. This clear policy guarantees that harmful hemp materials containing psychoactive compounds do not enter the market.

Based on the report released after the hearing, Congress will take steps over the next few months to include CBD regulatory guidelines in the Farm Bill 2023. This will regulate any non-toxic compounds derived from hemp as a dietary supplement. In addition, Rep. Chellie Pingree would make similar provisions in his proposed Hemp Advancement Act.

Wang explained that both measures are absolutely necessary to restrict the hemp products’ path to safe, non-toxic materials.

On the other hand, Quarles recommends considering some of the key clauses of the Hemp Advancement Act, most notably raising total THC limits for raw hemp material from 0.3 percent to 1.0 percent and removing the requirement for testing facilities to register with the DEA have to register. He believes raising the federal definition of hemp crops is the most appropriate move for the federal government. He also noted that the proposed 1.0% limit should include every THC isomer found to have toxic effects on users, including delta-9, delta-8, delta-9, HHC, and delta -10.

The future of the hemp and CBD industry depends on the decision that will be made in the coming months. Adopting a “total THC” criterion instead of a “delta-9-THC alone” standard creates a threshold that more accurately reflects the substance’s actual high potential.

As Quarles rightly pointed out, we should expect moderate growth in acres planted for years to come, at least until the FDA establishes the regulatory framework for CBD and other non-intoxicating cannabinoids. Wang concluded that clear regulatory guidance for CBD would help build the positive momentum needed for the U.S. to reclaim its position as the world leader in industrial hemp. 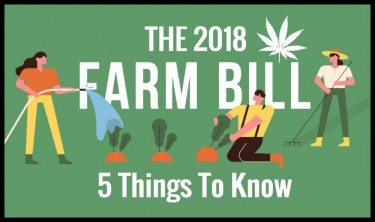 5 THINGS YOU SHOULD KNOW ABOUT THE 2018 FARM BILL, READ THIS!