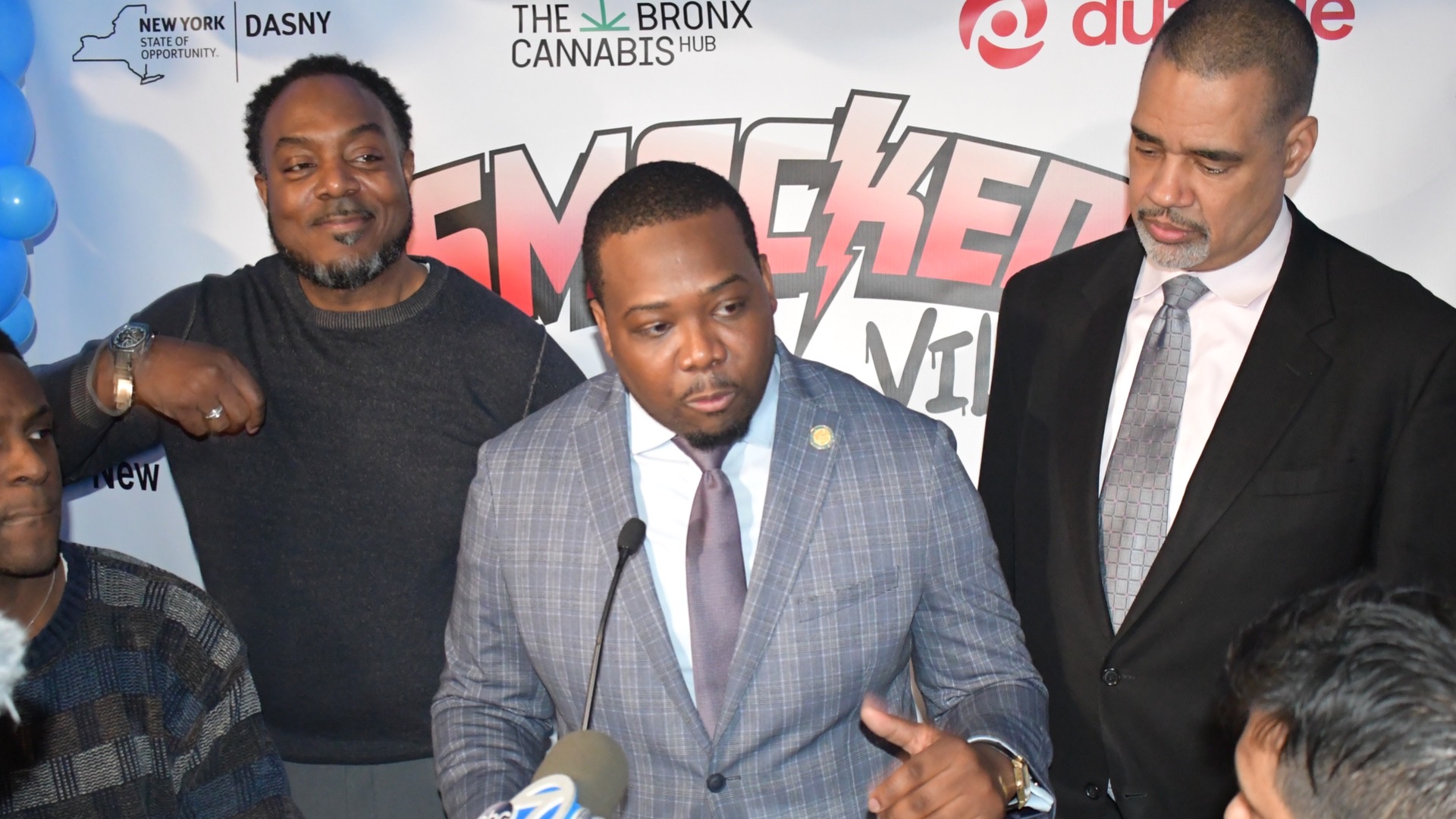 Smacked Village owner Roland Conner is New York’s first dispensary owner with a cannabis conviction. After his new pop-up shop becomes permanent, Conner plans to pass the shop on to his son.

New York’s mission to build the fairest cannabis industry in the country continues today with the opening of Smacked Village in Manhattan’s Greenwich Village neighborhood. Smacked Village is a pop-up shop set to reopen later this year — and the first of many to be run by an owner with a previous cannabis conviction.

Located at 144 Bleecker Street, Smacked opens its doors to adults 21+ from 10am today and closes at 8pm. The store will be New York’s second legal recreational cannabis store. Officials said there are currently more than 1,200 unlicensed stores catering to the city’s gray market.

Smacked Village legal products include pre-roll joints from Lobo Cannagars, eighths from Flower House New York’s local farms and Ayrloom vapes, edibles and fizzy drinks from Beak and Siff. The soft opening, or pop-up launch, means the store will only stay open for the next month before closing to be renovated and reopened later this year.

Leafly will be lining up throughout the day to shop and share menu reviews and experiences.

Smacked Village is owned by the pro-justice New Yorker

Roland Conner, owner of Smacked, is one of New York’s first 36 official licensees of hundreds to come. New York dispensary owners must have previous convictions related to cannabis in New York (among other requirements) to open a legal dispensary under the state’s Conditional Adult-Use Recreational Dispensary (CAURD) program. Some nonprofit organizations in New York are also eligible for retail pharmacy licenses.

After opening the first 175 CAURD stores, New York will open additional application windows. Many applicants were in the building to support Conner. Other CAURD applicants from across the state have shown their support, and many have formed a group to share information and encouragement.

Housing Works, New York’s first licensed dispensary, opened on December 29, 2022. The nonprofit is one of 25 state-licensed organizations that have a history of assisting those harmed by the War on Drugs and will open nonprofit weed shops across New York.

Roland Conner was moved to tears when he first saw the Smacked building, according to Mike Wilson of Temeka Group, the company contracted to design and build all of New York’s dispensaries. For both the pop-up and new store, the group plans to leverage their experience building existing dispensaries for Cookies and Stiiizy, in addition to constructing the Grammy Museum building and the Lakers team store.

The New York Social Equity Fund is a hot topic in the industry. The state plans to raise $150 million to help launch its first wave of dispensaries. The social equity fund will be combined with an allocated $50 million from Gov. Kathy Hochul’s 2023 state budget to be used for training programs, business expansion and forgivable business loans to support new CAURD dispensaries.

All eyes on the pioneers of New York heritage

Leafly spoke to cannabis pioneer Branson about his plans to expand his rich legacy into the legal industry. He’s currently working with Cookies to bring back the iconic triangular bags he once flooded New York with. He is also receiving support from the State Cannabis Bureau to become a licensed operator with his own storefront. Branson and Smacked Village owner Roland Conner are two of the many veteran players poised to make a splash in New York’s lucrative legal cannabis industry.

Ayrloom vapes and drinks are fast becoming bestsellers. Smacked Village will also carry eighths of the buds from Flower House and Florist Farms. Theory edibles will also be available.

Shoppers can purchase pre-rolls from Lobo Cannagar’s world-renowned pre-rolls. Eduardo Whittington, aka Eddie Lobo, runs the state company Lobo Cannagar and hopes to soon be licensed to manufacture cannabis products in his home state of New Jersey for the adult market. Right now, it’s partnered with local New York growers to become one of the first products on retail pharmacy shelves.

In 2022, Whittington told Leafly that Lobo Cannagar’s business model is unique for a multinational cannabis operation. The company does not grow cannabis or sell it in its own stores. Instead, it partners with the best possible operators in each market to collaborate on hand-rolled firecrackers that will make an impression on whoever hits them.

“I run my business this way because there isn’t a nationwide cannabis yet,” Whittington explained. “Each state has its own rules and regulations, like a fiefdom with petty lords ruling over their states,” he said. The fractured industry provided Lobo with a path to becoming an off-plant company that slides across borders with relative ease. As more markets come online, the model should continue to thrive.

Shows you pharmacies near Owenton, KY

How Dutchie will boost pharmacy sales in New York

Dutchie point of sale equipment is used in Smacked Village and all other retail outlets in New York. (Calvin Stovall / Leafly)

For now, Dutchie will deliver the tablets, registries and user experiences for every New York pharmacy. The company specializes in back-end data flow and processes that support cannabis stores in 36 US markets and dispensaries based in Canada.

The Smacked Village menu will feature a variety of items that New Yorkers look for everywhere. Quality, consistent, and safe edibles should sell like hot cakes, no matter what the cost. Housing Works has had trouble keeping its gummy candy on shelves, despite the fact that there are much cheaper options across the city. how do we know We stopped by three separate times this month hoping to snag New York’s first legal THC-infused gummies. So far we’ve been close, but no cigar – all of the Florist Farms edibles have sold out. At Smacked, cart smokers should appreciate having regulated options, even if they cost a pretty penny.

The new store will help balance the number of licensed and unlicensed stores, which now stands at two to about 1,200. Citizen complaints, reports of toxic products and the need to protect incoming legitimate stores have prompted regulators to crack down on unlicensed storefronts in recent months. In March 2021, New York’s Legalization Act immediately permitted possession and consumption, but offered no licensed options until December 2022 when Housing Works opened the state’s first legal store.

This story will be updated from day one at Smacked Village with prizes, product reviews and more.