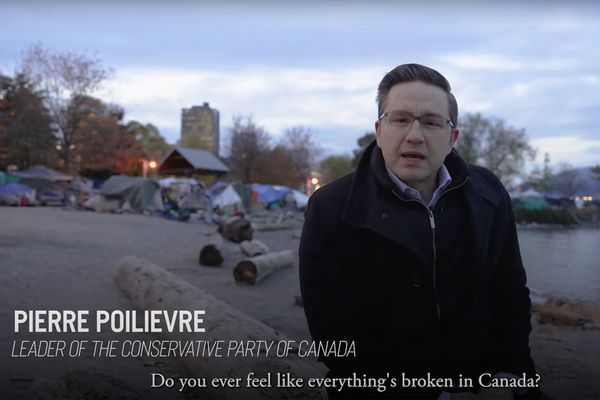 In the five-minute video, Poilievre uses a Vancouver tent city as a backdrop to campaign for the drug war.

For a decade, British Columbia (along with other Canadian cities) has provided a clean and safe supply of drugs to addicts.

He calls it a “failed experiment” brought in by “woke Liberal and NDP governments,” before saying he will end those policies and instead put taxpayers’ money on recovery and treatment.

The narrative is easy to follow: there is a link between safe supply points and opioid-related deaths. Ergo, one caused the other.

Unfortunately, the data doesn’t support this narrative. Nor does the data support Poilievre’s claim that Alberta’s anti-drug policies have worked better.

(In fact, the way Alberta handles opioids isn’t all that different from the rest of the country, including safe supply locations in Edmonton and Calgary).

But if you want to criticize Poilievre’s video, there are many articles on the subject.

Most critics, however, defend safe sources, claim compassion for addicts and, far from siding with Poilievre on his ideas, only parrot the federal minister of addiction, Carolyn Bennett, calling the video “irresponsible” and “misguided”. describe.

Pierre Poilievre is wrong about the cause of death from drug overdoses in Canada. And like his critics, he’s also wrong when he spends money on “treatment and recovery.”

Just as its critics are wrong that taxpayer-financed “security of supply” is the way out of the crisis.

How Poilievre (and his critics) misdiagnose the opioid crisis

When Poilievre misdiagnoses the opioid crisis, it comes from a place of politics. His goal is to acquire Justin Trudeau’s PMO power, which has increased significantly since the Harper years.

Therefore, when ordinary families are faced with a shortage of painkillers for children, it is time to attend to the taxpayer-funded supply of hard drugs.

Especially since a decade of “safe care” has not yielded any immediate results.

Now, critics rightly point out that over 80% of overdoses in BC take place in a home or emergency shelter, not on the street. The problem is not so much the homeless dying on the streets as it is the toxicity of street drugs.

And Poilievre isn’t opposed to using taxpayers’ money to fund treatment guidelines. He doesn’t agree with the means.

But in a discussion of Poilievre’s Everything Feels Broken video, almost no one mentioned the elephant in the room: the pharmaceutical giants.

They created the opioid crisis and benefit from the delivery of methadone and suboxone to safe supply points.

Poilievre critics would be well advised to stop the superficial attacks and get to the heart of the problem. And Poilievre’s supporters would do well to question their leader’s motives and proposed solutions.

If you’re looking for a villain, look no further than McKinsey & Company.

McKinsey & Company is a global management consulting firm. They have existed since the 1920s and are considered one of the “Big Three” consulting agencies worldwide.

They have also been embroiled in many controversies, from Enron, the 2008 financial crisis, insider trading, conflicts of interest and ties to murderous dictators, including Saudi Arabia.

So it should come as no surprise that they played a role in the opioid epidemic.

McKinsey & Company wanted to “supercharge” sales of Oxycontin. They suggested strategies to combat the messages from real parents who lost their children to oxy overdoses.

They also advised opioid manufacturers on how to circumvent government regulations.

They’re the kind of company that will pull the numbers together and figure out that it’s cheaper to pay the families who overdose someone $36.8 million than to stop selling the toxic crap.

McKinsey’s services transformed Endo from a small generic opioid manufacturer into one of the world’s largest opioid companies.

McKinsey also recommended targeting and influencing physicians. They wanted elderly and long-term care patients who are dependent on opioids.

They are staffed by a revolving door of consultants who either come from (or later work for) government regulators like the FDA and pharmaceutical clients like Purdue.

Purdue Pharma filed for bankruptcy and had to pay a multibillion-dollar settlement for “willfully conspiring and colluding with others to support and encourage the overprescribing of pain medication “without a legitimate medical purpose.”

The phrase “The fox guards the chicken coop” has never been more relevant.

Poilievre spends five minutes criticizing his political opponents instead of the corporate-state cartel that got us to this point. Then you know that Poilievre misdiagnosed the opioid crisis.

While Poilievre misdiagnoses the opioid crisis, he casually mentions the doctors who have “prescribed and overprescribed” opioids.

For someone talking about gatekeepers, you’d think Poilievre could put two and two together. But he did not go that far with this criticism.

If Poilievre is after Justin Trudeau, why not point out that our 2019 blackface premier made a McKinsey pal (Dominic Barton) Canada’s ambassador to China?

(Although you could argue in Justin’s defense that dealing with a murderous regime that doesn’t believe in the sanctity of human life requires an ambassador who thinks the same way).

Like most of Poilievre’s government criticisms, he misdiagnoses the opioid crisis by not delving deeper into the issue and pointing the finger at his political opposition rather than the merging of corporate and state power.

And why should he?

Like Liberal and NDP governments, Conservatives are more abiding by lobbying concerns than their constituents.

And when voters get rowdy, say when organizing an occupation in the nation’s capital, the corporate press is there to push a narrative that deceives the masses and protects the financial interests of the elite.

This is where critics on both sides fail to grasp the nature of the opioid crisis. The pharmaceutical companies not only caused this crisis (with the help of the state), but they also benefit from the proposed “solutions”, including safe supplies.

How Poilievre can reverse his misdiagnosis of the opioid crisis

In his Everything Feels Broken video, in which Poilievre misdiagnoses the opioid crisis, he proposes government solutions, such as tightening border security to keep illegal drugs out of the country.

This is obviously unrealistic. One would have to claim ignorance of the global fentanyl trade to believe that “boundary strengthening” would work.

In addition, Poilievre says: “There is no secure supply of these drugs.”

This suggests that even if we rid the country of killer opioids like fentanyl and carfentanyl, we would still have a drug problem.

As if the mere existence of an opioid was enough to justify the drug war.

You won’t find the right solution to Poilievre’s brand of quasi-libertarian politics. And you won’t find an answer from the various left-wing parties, who have never found a problem that more government spending couldn’t solve.

Politicians know who butters their bread. In addition, cultural norms and attitudes towards drugs shape our thinking.

But no matter how you cut it: nobody has a right to your body but you.

Thinking it through, someone who puts you in a cage for using opioids is an aggressor and a bully.

That said, the solution to Canada’s opioid crisis is heroin legalization.

Is there a difference between “hard” drugs like heroin and “soft” drugs like cannabis? Is one more addicting than the other? what about alcohol Is this a “hard” or “soft” drug?

Perhaps the distinction itself is arbitrary.

Too much of our talk about drugs, especially opioids, is tangled up in talk about “loss of control” and “involuntary behavior.”

Problems arise when people behave according to their ideas about drugs. Nobody lives on the streets and commits crimes to get their hands on refined sugar.

But if you limit the supply of sweets, I can guarantee you that societal chaos is just around the corner.

A ban on refined sugar would encourage illicit supply of sugar. And slicing that non-sugar white powder is a sketchy but efficient way to boost profits.

Would the solution be to put sugar addicts in rehab centers where they lose any remaining autonomy?

Or would the solution be to set up clinics where the people who are the toughest can safely take care of themselves?

Or is the solution to legalize all sugar and let individuals decide what’s best for them?

Poilievre misdiagnoses an opioid crisis. But so are his critics. The answer is obvious. It’s just the drug war propaganda that keeps us from seeing it.