People pay big bucks to get their hands on ayahuasca.

It costs a lot of money to attend an ayahuasca retreat at many retreat centers across the United States, where you can stumble upon the ancient entheogenic drug for healing purposes. However, there are also people who spend thousands of dollars to travel to South America, where the use of ayahuasca originates from local tribes.

The spiritual use of ayahuasca can be traced back to 900 BC. when it was used by the Peruvian Chavin tribes. During the 16th century, Spanish missionaries encountered the indigenous tribes of the western Amazon basin who used it for shamanic, ceremonial, and social experiences. Typically, the ayahuasca brew is made from a blend of the Banisteriopsis caapi vine along with Psychotria viridis, known as chacruna in South American countries. Chacruna contains high levels of DMT found in most plants, although the monoamine oxidase inhibitors (MAOI) prevent us from experiencing the psychedelic effects of DMT. However, once mixed with Banisteriopsis caapi, this allows the DMT to enter our blood and brain and combine with serotonin receptors, resulting in a great psychedelic experience.

While South American tribes have used ayahuasca for centuries, we in the West have only just begun to scientifically and medicinally peel away its many layers. It has been found to have tremendous healing properties, particularly for treatment-resistant depression, anxiety, post-traumatic stress disorder, and more. People are keen to experience its healing benefits, especially for those who have failed traditional and conventional psychotherapy and medication.

Given that DMT is still technically illegal in the United States, ayahuasca is hard to come by unless you have tons of cash to burn. It can also be risky to attend retreats from inexperienced and so-called shamans who are trying to make money – it can do more harm than good in this case.

There are two basic components in a traditional ayahuasca brew, although there are actually thousands of ways you can brew it that involve different ratios

So, is it possible to standardize ayahuasca into a medicinal drug for therapeutic use?

A Canadian pharmaceutical company thinks so.

“Nevertheless, we see doors opening easily for psychedelic therapies that fall outside of the traditional medical-pharmaceutical prescription model,” he adds.

Filament is working on a medicinal version of ayahuasca that contains standardized, measurable amounts of its active ingredients. Lightburn hopes this will open the doors to conducting clinical trials with ayahuasca, and they are working on FDA-approved trials for 2023.

“We hypothesize that the reason why ayahuasca might work well for certain indications has to do with the fact that it’s not just DMT, it’s the combination,” he explains.

How safe is ayahuasca?

Just ask anyone who has consumed ayahuasca and they will tell you that the experience is downright unpleasant. It works, but you definitely have to go through severe vomiting and other discomfort. After all, it is a spiritual drug and not a pharmacological one.

A recent study conducted by researchers from the University of Melbourne analyzed the side effects of people consuming ayahuasca. dr Daniel Perkins, who has been involved in numerous studies on psychedelics and medicinal cannabis, also directs the Global Ayahuasca Project, which aims to raise awareness of the brew and its effects on people who do it. For the study, they analyzed data from the Global Ayahuasca Survey, which was conducted online from 2017 to 2019 and was answered by 10,836 people from more than 50 nations.

The survey asked people about their demographics, educational level, mental health history, and ayahuasca experience. They were also asked to detail any side effects they experienced and to provide information on whether they experienced any emotional or mental effects after participating in ayahuasca ceremonies.

dr Perkins and his team excluded responses from people who did not complete the side-effects portion of the questionnaire.

They found that about 69.9% of respondents reported acute physical side effects, although the most common, unsurprisingly, were nausea and vomiting, followed by headache and nausea. Researchers confirmed that nausea and vomiting are considered “normal” for ayahuasca users. “In traditional ayahuasca ceremonies, and even non-traditional ceremonies, not only is vomiting/nausea not considered an adverse effect, but it is sought after for its purifying and perceived spiritual cleansing effects,” they write.

However, they found that based on the responses, the benefits of ayahuasca far outweighed any risks involved.

One of the survey participants even added: “I have had numerous experiences where ayahuasca has brought into my awareness difficult patterns in my daily life, which is never comfortable but always leads to growth in the end.”

“While intriguing, this finding is consistent with the early age of ayahuasca initiation in traditional contexts, both indigenous and ayahuasca churches, where researchers have been unable to find long-term neuropsychiatric changes,” the authors write.

For those brave enough to endure the temporary physical discomfort, ayahuasca can be life-changing. Being able to standardize its doses and make it more accessible, which hopefully can happen in the near future, will improve the lives of thousands of people around the world. Hopefully, Filament Health’s research will yield positive results soon. 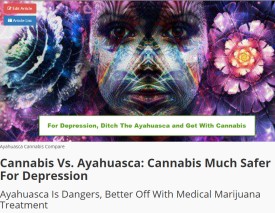 WEED OR AYAHUASCA FOR DEPRESSION?