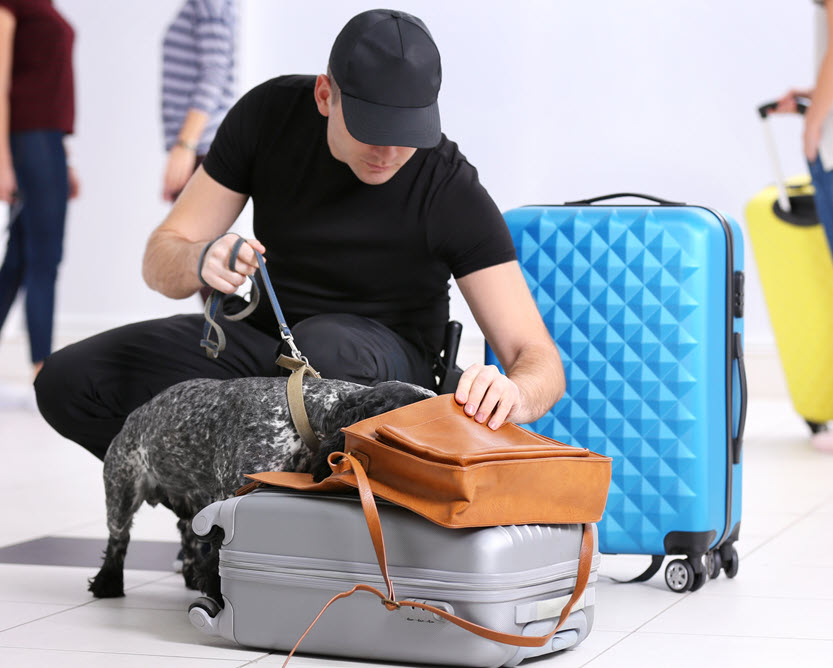 As a result of the recent arrests, travelers departing from Los Angeles and heading to London’s Heathrow Airport may face heightened security measures. Nine people have been arrested on suspicion of attempting to smuggle cannabis, a substance legal in California but illegal in Britain, where it fetches a higher price among British drug dealers. Between January 10 and 17, over 400 kilograms of the drug were seized from passengers at Heathrow Airport. As the investigation continues, authorities will closely monitor the LA to London route for suspicious activity.

A substantial quantity of illegal drugs with a street value of £5.5million was discovered when authorities intercepted passengers attempting to smuggle the contraband through Heathrow Airport. According to the National Crime Agency, the individuals flew from Los Angeles to Heathrow and hid the cannabis in their checked luggage. The discovery of these illegal substances underscores ongoing efforts by traffickers to circumvent security measures and bring the drugs into the UK.

In response to the recent seizures, NCA Heathrow Branch Commander Andy Noyes has made it clear that law enforcement will be closely monitoring passengers on the Los Angeles to London route and will be tightening security checks. Investigations into these incidents continue, and Noyes has issued a warning to anyone considering engaging in drug trafficking. He urged them to consider the grave consequences of their actions and think twice before getting involved.

Those attempting to smuggle illegal drugs into the UK encourage organized crime and put themselves at risk of severe penalties. The consequences of being caught can be long prison sentences, making the risk not worth it.

Authorities found that each person attempting to smuggle the drugs was carrying between 30 and 40 kilograms of cannabis, all tightly sealed in vacuum-packed containers.

The nine people suspected of drug trafficking have been charged with attempted importation of class B drugs and are currently being held in custody awaiting further trial. Suspects include Kiara Lanee Malone, Sabrina Desiree Hobby, Zohrab Idzhyan, Anthony Sarkis Hoffman, Ara Janneh, Madani Ba Junior, Dana Ree Freeman, Kerri Marie Hall and Zered Afuhia-I-Moana Akolo, all between the ages of 25 and 48 All those arrested were five women and four men, all US citizens, arriving at Heathrow Airport from Los Angeles.

Malone, the first suspect, was reportedly arrested on Tuesday, January 10, and Border Force officers allegedly discovered about 30 kilograms of cannabis in her checked luggage. Another seizure followed three days later when Hobby was arrested, and further arrests were made on Saturday, Sunday and Monday.

The National Crime Agency (NCA) has reported that a total of over 340kg of cannabis has been seized with an estimated street value of £5.5million. Janneh, Freeman, Junior, Hall and Akolo were among the latest arrested and are expected to appear at Uxbridge Magistrates’ Court on Tuesday.

Not everyone agrees with relaxing cannabis laws

During a Conservative Party conference in Birmingham in October, local media reported that police commissioners are pushing for tougher regulations on marijuana, including tougher penalties for possession and sale. The idea is to reclassify marijuana, which has been a topic of discussion.

The police commissioners said that given new evidence suggesting cannabis may be more harmful than previously thought, the existing classification of marijuana is no longer appropriate. As a result, they propose reclassifying marijuana as a Class A drug, which would result in stiffer penalties for those found in possession or involved in selling the substance.

Currently, people found in possession of Class B drugs such as cannabis, speed and ketamine can face up to 14 years in prison. Possession of Class A drugs, including heroin, cocaine and ecstasy, can carry a life sentence.

However, Peter Reynolds, president of CLEAR, which opposes cannabis prohibition, has criticized the proposal as “completely insane” and argued it would lead to more crime, violence and child exploitation. Reynolds doesn’t think the idea promoted by the police commissioners makes sense.

According to Reynolds, it is absurd to continue with the same approach that has failed for the past 50 years. The only ones who would benefit are uninformed politicians and those involved in the illegal drug trade. I’m clear on that much, he added.

A week after the Conservative Party Conference, UK Home Secretary Suella Braverman expressed her support for the reclassification of cannabis as a Class A drug, similar to cocaine and heroin, and said the classification would be reviewed. Braverman, who opposes cannabis decriminalization, believes deterrents are needed to curb growing cannabis use among teenagers. “We have to scare people,” she said, according to the Sunday Times.

During the Conservative Party convention, the Home Secretary announced her intention to take a strict stance on marijuana use. She highlighted that some regions of the UK have effectively decriminalized marijuana use, with the percentage of people charged with drug-related offenses falling to 19.3% in 2022, down from 33.3% in 2015.

In response to the government’s proposal, 500 public health and drug organizations and industry experts have jointly written an open letter to the UK government expressing their concerns. They stated that the proposal would “criminalize young and vulnerable people and fail to address the underlying issues”. Organizations that signed the letter included the Association of Directors of Public Health, the Public Health Faculty, the Police Foundation and the British Medical Association.

Authorities are investigating the links between these seizures, according to NCA Chief Investigator Darren Barr. However, it is certainly unusual to intercept so many shipments on the same route in such a short time.

Thanks to the efforts of the Border Force, these dangerous drugs have been prevented from reaching the UK’s streets and harming our communities, he added. Darren believes this seizure illustrates the successful collaboration between Border Force and the NCA and their shared commitment to protecting our communities and disrupting the illicit drug trade.