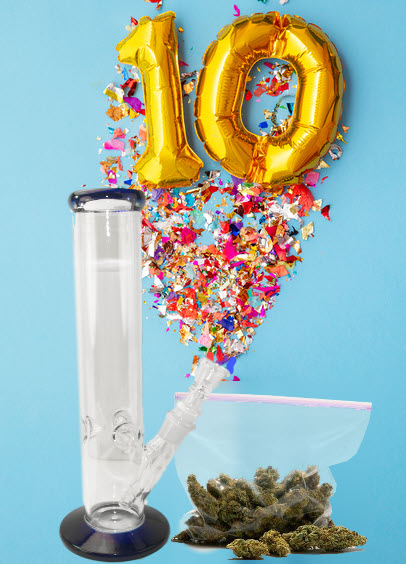 Happy 10th Weedaversary, Colorado! – What have we learned after 10 years of legal cannabis in Colorado?

Ten years after Colorado took the bold step of legalizing recreational cannabis, there are a number of takeaways to take home. While it is important to note that so much is still unknown, significant progress has been made in some areas. Read on as we discuss what we’ve learned so far and the impact cannabis has had on the economy, health and public safety.

Cannabis has long been a big talking point in the US, long before the wave of acceptance began. Bans have been the order of the day for so long that stereotypes about the users of natural products have emerged. Years later, as decriminalization and acceptance began, various waves of claims and promises surrounding cannabis’ medicinal benefits filled the air. Unfortunately, most of these claims have yet to be substantiated, and 10 years after recreational cannabis was legalized in Colorado, there is still so much we don’t know.

Colorado-based reporter Claire Cleveland for CPR News noted the cannabis situation in Colorado to such an extent that the cart came before the horse. Such was the result of her interaction with Professor Brian Keegan and Professor Angela Bryan, both of the University of Colorado Boulder. Both professors commented on the lag between legislation and research as it is obvious that no substantive research is done before legislation. They also commented on common myths and what is known about cannabis today.

Common knowledge since the War on Drugs era has always indicated that all cannabis users are stoners. Many began to think of cannabis users as stoneheads waiting in an alleyway waiting for someone to get them a quick fix. Luckily, there has been a quick shift from that mindset as cannabis use has now spread to all areas of consumption. Different people use cannabis for different reasons. From housewives looking to relieve stress, to active workers looking to relax and enjoy a peaceful sleep, to medical patients seeking relief from pain. Ten years after the legalization of legal recreational cannabis, segregation is slowly becoming a thing of the past.

The data also supports the notion that cannabis users aren’t stoners or potheads, and the professors had their two cents on the matter, too. A report has shown that cannabis users are more likely to encounter exercise recommendations and habits than non-users. Professor Bryan noted that this may be due to some cannabis users using it to recover from strenuous exercise. Others are also known to use cannabis to help focus during exercise. The result of this is lower rates of type 2 diabetes and better insulin function in cannabis users.

Knowledge of cannabis subspecies has always revolved around indica or sativa strains. Indica has always been known to promote relaxation, while sativa is stimulating and helps open the mind to creativity. Ten years after recreational cannabis was legalized in Colorado, however, it seems to like its hybrids, which are now the talk of the town. Over 90,000 samples of cannabis products were analyzed by Keegan and his collaborators in six states. The results of the analysis show that most of the products on the markets are hybrids of both species. The interpretation of this is that cannabis users are now enjoying the benefits of both the stimulating and relaxing effects of both subspecies, depending on the proportion. More research is needed to fully understand the scope of hybrids and their effects on users’ minds and bodies.

Research has found that the two main cannabinoids in cannabis play a major role in its effects on pain relief. The synergy between THC and CBD, like other cannabinoids, is known as the entourage effect and is one of the most important uses of cannabis. CBD is particularly well known for its anti-inflammatory properties, which make it useful in relieving pain. This also gained a lot of appeal, which justified the FDA’s approval of Epidiolex for seizures in children. Brian noted that this is one of the top talking points for cannabis in the past 10 years since it was legalized in Colorado. This sector is expected to grow with more research and cannabis may help eliminate the problem of opioid addiction for pain relief.

Keegan spoke about some of the issues facing the cannabis industry and one that stood out was the issue with contaminants. The presence of these foreign substances such as pesticides, mold and fungicides can lead to the development of negative side effects. Colorado has imposed limits on mold and pesticide testing since legislating its legal cannabis markets. These chemicals pose a serious public health risk and can be detrimental to overall body health, so much needs to be done to effect their elimination.

There have been fears that legalizing cannabis will increase the rate of DUIs. It is good to know that these fears have not been confirmed ten years later. It is a very bad idea to drive while under the influence of cannabis, even in states where the use of cannabis is legal. Thankfully, alcohol remains the number one cause of DUIs in Colorado so far, rather than cannabis as once feared.

Teenage cannabis use was also a major talking point, sparking fears prior to the legalization of recreational marijuana use. Ten years after legalization, data shows that the proportion of underage cannabis users increased by 4% over that period. While not the ideal wish, it is still a positive as there have been fears that the increase will be astronomical. It is now up to regulators and government to work with cannabis companies to find ways to help reduce these statistics.

6 YEARS OF LEGALIZATION, WHAT DID WE LEARN IN COLORADO?