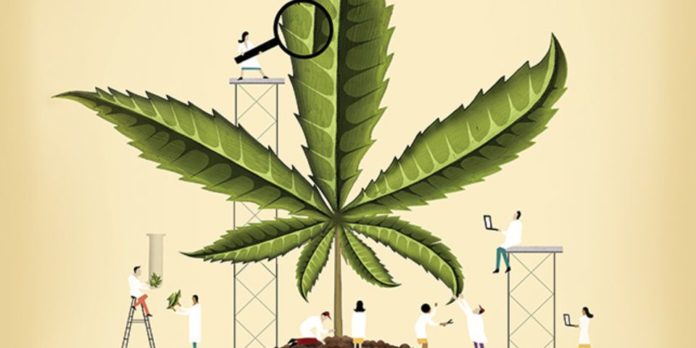 Does CBD modulate the effects of THC? No, says a new study.

For years, both experience and research have shown that CBD has a soothing effect when consumed with THC.

For example, budtenders suggest new consumers a THC strain that is balanced with CBD so as not to overwhelm them.

If a seasoned smoker has eaten something edible or taken some oil and is feeling too high, they will use CBD to take the edge off.

But a recent study suggests this is all placebo.

More detailed studies will finally determine whether CBD modulates THC. But for now, we must rely on conflicting research and anecdotal experience.

CBD and THC have drastically different effects. THC stands for tetrahydrocannabinol, the most well-known of all cannabis compounds. THC binds to our cannabinoid receptors to create the “high” feeling.

CBD, on the other hand, does not bind directly to our cannabinoid receptors. It is more akin to a psychedelic as it targets the serotonin 5-HT1A receptors which we mainly find in our stomach.

These endogenous cannabinoids bind to our cannabinoid receptors. Researchers hypothesize that THC cannot fully bind and therefore has a dampened effect because CBD inhibits the breakdown of anandamide in the cannabinoid-1 receptor.

Research conducted under double-blind, placebo-controlled conditions suggested that CBD can reduce the unpleasant effects of THC.

Other research disputes this. But what about this new study?

According to the latest study #2, CBD does not modulate the effects of THC. This randomized, double-blind, crossover study published in the journal Neuropsychopharmacology was thorough.

Researchers recruited 46 healthy volunteers aged 21 to 50 years. They had used cannabis before, but not more than once a week in the past year. The researchers asked them to inhale cannabis vapor containing 10mg of THC combined with various concentrations of CBD.

So per experiment, they consumed a 10:0 ratio, then a balanced 10:10 ratio, followed by 10:20, and then 10:30. In other words, in the last experiment, participants inhaled more CBD per milligram than THC.

After each experiment, the researchers asked the participants to complete a series of tasks. The researchers measured “psychotic symptoms,” which included:

For example, THC has been linked to delayed verbal memory. The study states that CBD did not improve these levels.

The study concludes, “There was no evidence that CBD modulates the effects of THC on other cognitive, psychotic, subjective, pleasurable, and physiological measures.”

I go even further and suggest, “This should be considered in health and safety decisions about medical and recreational cannabis.”

But did this study definitively determine these results? Even the authors admit that without a placebo-controlled group, their research can only go so far.

Claiming that “there is no evidence that CBD protects against the acute side effects of cannabis” when other double-blind clinical studies have shown the opposite suggests more validity.

This latest study suggests that CBD does not modulate the effects of THC in the short term. But what about long term?

Cannabis connoisseurs know about tolerance. If you smoke weed on a daily basis, you build up a tolerance to THC. You can take a few days off and have your cannabinoid receptors reset. When you get back to the herb, you’ll feel the effects more with less.

CBD could work in the opposite direction. It can boost receptor sensitivity, meaning you may need less over time.

CBD can also restore homeostatic levels (and balance your endocannabinoid system). Although it may appear to do nothing, CBD works with your system without inducing the “psychotic symptoms” of THC.

At least one study suggests that the longer you use CBD, the lower dosages you need. Which is another way of saying, you need to build up some CBD in your system before it can work.

With that in mind, how accurate was this new study? A short-term look at people inhaling THC-CBD vapor with virtually no use after a year?

And not a placebo-controlled group, to boot.

Still, these researchers want their inconclusive opinions to be considered “in health and safety decisions” about cannabis.

The problem with the “CBD does not modulate THC” study.

Of course, the obvious problem with this CBD modulates THC study is its short-term aspect, the lack of a placebo group, and the cannabis delivery method.

Cannabis is a complex plant, and when you consume THC or CBD via edibles, the body processes the cannabinoids differently.

The same applies to plant extracts. Did the volunteers in this study take THC and CBD isolates in vape format? Or did these full-spectrum products contain other cannabinoids like CBG and CBN?

What would happen if a participant consumed 10 mg of CBD edibles for two weeks and then smoked a 1 gram joint with 25% THC? And what if we combined them with a participant who had not used CBD two weeks previously?

For this reason, more research is needed before inconclusive findings should be ‘considered’ in government policy.

But the big problem with the CBD does not modulate THC study is bias.

The study states, “Cannabis users may reduce harm when using a higher CBD:THC ratio due to the reduced THC exposure rather than the presence of CBD.”

Throughout the paper, researchers engage in a priori extremism, calling THC “harmful” without further discussion. It’s one of the biases built into the study. And we saw it earlier by calling the effects of THC “psychotic symptoms.”

But what evidence links cannabis, particularly the effects of THC, to “psychotic symptoms”?

When we consume THC, we don’t become “psychotic”. we get high We get stoned. The fact that they didn’t use a neutral, scientific term to describe the effects of THC puts the entire publication in question.

Not to mention that English and Australian universities funded this study. Two countries not exactly known for their legal recreational cannabis markets. (Even their medical program is tightly controlled and absurdly risk-averse).

In addition, we have conclusive, double-blind, placebo-controlled studies demonstrating that CBD reduces anxiety. And since higher levels of THC induce anxiety in some people, it’s no surprise that we have previous studies suggesting that CBD modulates the effects of THC.

What did this study prove?

The problem with this “CBD does not modulate THC” study is its bias and limited scope. They created a category of “psychotic symptoms”. Then they short-term tested this theory on a small group of participants without a placebo-controlled group.

It may be that CBD is not the modulating agent we think it is. Further studies may confirm the conclusions of this study.

But more research is needed. Governments destroyed nutritional science in the 20th century by accepting half-baked theories and biased research as proven fact.

As cannabis legalization sweeps the world, we cannot allow the same to happen to cannabinoid-based therapies.