Do you lose track of time when you’re high?

Examining the influence of marijuana on time perception

The fact remains that at this point no one really knows why our timeline is so heavily influenced by cannabis. As with most things on the effects of cannabis on the human body and mind, there are few explicit research studies. There’s a good chance this will remain so for some fundamental reason for the foreseeable future, not until the federal ban on marijuana is lifted. There aren’t many funded studies that allow researchers to offer illegal drugs to people for free. This is regardless of the number of people who will turn up for such research very quickly.

A few studies that have been conducted offer a fascinating insight into the internal mechanics of our timekeeping and how it is affected by cannabis. One such study measuring human estimates of time has shown that this phenomenon is not just an anecdote. The researchers gave the students THC intravenously and then gave them distracting tasks, like counting the number of letters B that appear in a random series of letters on the screen. The subjects were then asked to estimate how much time had elapsed. The overwhelming majority of subjects estimated that more time was spent than was actually recorded.

However, it was also found that the overestimation effects of time were not sharp in subjects who were already smoking weed more frequently. It is clear that there is an overestimation of the time, but the reason for this remains unclear. One theory that has some potential revolves around the region of the brain that controls wake and sleep cycles and your circadian rhythm, also known as your “body clock”. This biological process controls when you wake up and when you go to bed, as well as when you get hungry and some other rudimentary functions. The circadian rhythm resides in a region of the brain called the suprachiasmatic nucleus (SCN).

THE CIRCADIAN RHYTHM AND CANNABIS

Studying the circadian rhythms and brains of mice, researchers found that the SCN neurons possess endocannabinoid receptors, where the THC molecular spaceship docks with your neurotransmitter spaceport. Researchers discovered that when THC binds to the SCN neurons, it causes the neurons to fire more frequently. Researchers added THC to a petri dish containing SCN neurons from the brains of mice. The neurons were induced by the THC to act 50% more frequently than usual.

The researchers also speculate that THC leads to over-firing of the same neurons in humans. This would manipulate our circadian rhythm (body clock), resulting in the shock when we look at an actual clock. While these results are encouraging, there simply isn’t enough information about the effects of marijuana on the brain to offer any meaningful solutions.

DOES THE EFFECT ON TIME PERCEPTION DIFFERENT IN HEAVY CANNABIS USERS

So what makes heavy cannabis users seem less affected by the overestimation effects of time? Could it be because their SCN neurons are getting used to the THC? So do they stop overfiring after continuous exposure? If this were the case, would a regular cannabis user experience the same timing issues when taking a tolerance break from the herb? Or is it just that frequent marijuana smokers are getting used to having to tell the time while stoned, as this is fundamental to being a functioning marijuana user in society?

Of course, a few studies cannot encompass the experiences of all marijuana users. Some regular users claim that time seems to delay when they smoke marijuana. Others have even claimed that some voltages cause the clock hands to appear to be spinning faster than they actually are. Maybe it has nothing to do with your clock-telling neurons at all. It’s conceivable that being high makes it easier to daydream or focus on a single concept, which encourages creativity and frees your mind. Another possibility is that marijuana affects your short-term memory, making time pass faster.

TIPS FOR NOT LOSSING TIME WHILE YOU ARE HIGH

Whatever the real cause, if you find yourself struggling with timing after using marijuana, don’t stress. Embrace it and think about what you can use those free moments for. It’ll be like you’re in the movie Click and you’re Adam Sandler, only instead of a magic remote you’re stoned, and there are no lessons about family at the end.

Just think of all the benefits of slowing down time and getting lost in the moment. Make the movie into a full-length movie, or be enchanted by this video game. Grab your partner and get ready for some sexy time. Play football or frisbee with your friends in the park. Take a walk by the water. Alternatively, you can relax and immerse yourself in the album you haven’t heard in a long time. Let the fun times flow.

Alternatively, if you think stress makes things go faster, think of anything you don’t want to spend time on. Why not skip the experience when you know the DMV will be busy, your college lecture will be boring, or you have been forced to attend a professional chess match? Researchers will certainly study the effects of cannabis on time estimation once it’s allowed nationally. This will most likely come after studies are completed on its beneficial effects on PTSD, depression, anxiety, digestion, pain relief, and a host of other health conditions (because we’re not just junkies).

On the other hand, if you’re experiencing the loss of time associated with the effects of marijuana, simply enjoy it as part of the many benefits of being high. Don’t worry about that; it’s nothing serious like time warps, aliens or other science fiction. It’s exactly what I’ll call the “cannabis effect” or “stone time,” whichever is more catchy. 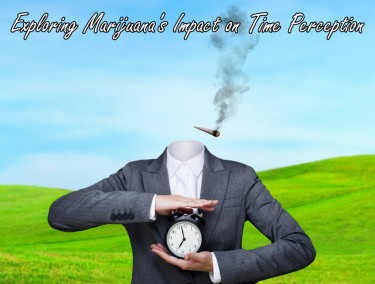 WAS EINSTIEN RIGHT ABOUT WHY WEED BREAKS OUR PERCEPTION OF TIME?