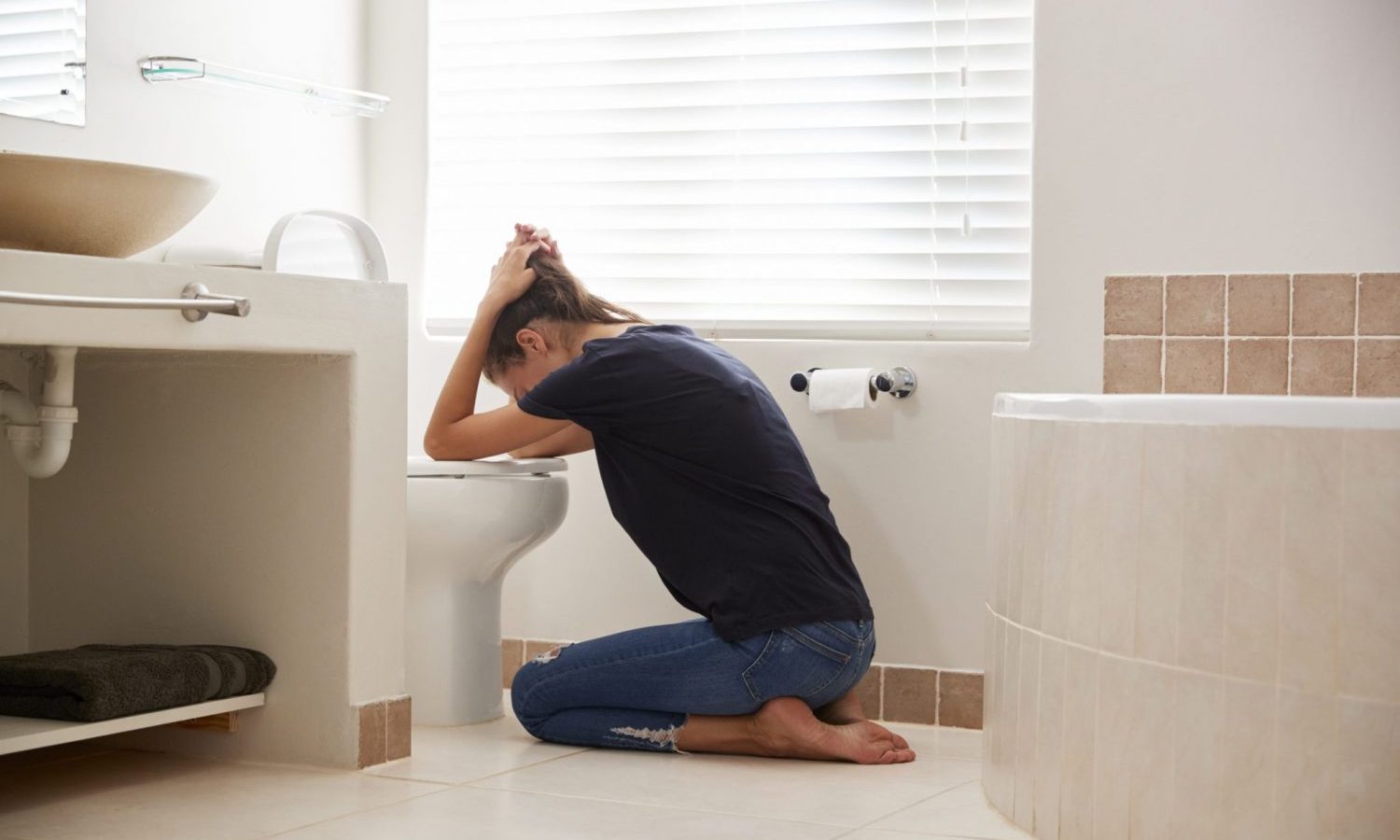 Cannabinoid Hyperemesis Syndrome: What Causes It and How to Treat It

Daily and long-term use of cannabis can cause a rare condition known as Cannabinoid Hyperemesis Syndrome (CHS). Symptoms include nausea and an upset stomach, to name a few.

Many researchers have tried to provide more details about CHS and its causes, but more study is needed as it is a fairly new condition. The first cases were reported in South Australia in 2004, where doctors began treating cannabis users for vomiting, stomach pain and more. The individuals experiencing these problems were long-time cannabis users.

Diagnosing the condition is often difficult considering many users seek treatment without mentioning marijuana use. In most cases, the symptoms disappear completely once the user stops using cannabis. However, with legalization still ongoing, the number of people using marijuana is increasing, and with it the number of those with CHS.

CHS is a rare phenomenon. In most cases, it occurs in people who use marijuana a few times a day (3-5 times) for years (usually 1-5).

Some research suggests that cannabis hyperemesis syndrome is caused by daily and long-term use of marijuana. The number of people being diagnosed with CHS is increasing as more states across the US legalize marijuana. However, the number of regular users who contract weed disease is not high. Some studies suggest that genetics play a role. There is a lack of evidence that would fully support the current theories surrounding CHS, so further research is needed.

Cannabis has multiple active components and being very complex, it affects each user differently. One of the main components is THC, which works against nausea. However, it has been found that the opposite can be true when someone uses cannabis regularly for an extended period of time. Some theories suggest that THC can cause cannabinoid receptors to behave differently than they’re supposed to. As a result, the consumer may suffer from cramps, vomiting, stomach pains and other problems.

Also read: What are the possible side effects of THC or cannabis use?

The symptoms of CHS are divided into three main stages. The first is called the prodromal phase, the second the hyperemetic phase, and the third the recovery phase.

The prodromal phase is the first, and symptoms at this stage are usually abdominal pain, morning sickness, and nausea. Other symptoms may include skin flushing, body temperature changes, and sweating. During this phase, most people continue to eat normally. Additionally, most users will continue to use cannabis because they believe it will help them stop nausea and vomiting. The prodromal stage can last a long time, in some cases a few weeks, months and even years.

The second stage is called the hyperemetic phase, and during this time the vomiting is often quite intense. To relieve nausea, people will mostly take hot showers throughout the day. Some people take marijuana to relieve nausea, but it only makes the situation worse.

Symptoms in this phase include nausea and nausea, vomiting after smoking weed, dehydration, stomach pain, eating disorder, reduced food intake, and weight loss. The syndrome presents a real medical problem. Extreme vomiting and severe abdominal pain can plausibly lead to scromiting (the combination of crying and vomiting). The phase lasts until the user stops using marijuana.

Also read: Medical marijuana – what you should know

The last of the three phases is the recovery phase. It begins the moment the user stops consuming cannabis. During this phase, all symptoms disappear and the person returns to normal eating habits. In addition, people generally feel better when they are recovering. There is also no need for several hot showers or baths throughout the day. The phase can last from a few days to a few months. If a person accidentally decides to return to marijuana, the symptoms will most likely return.

diagnosis of the disease

Various health problems can cause recurrent vomiting and it is important to note that CHS is a rare condition. The healthcare provider will ask the patient about the symptoms, and they will also ask about past health and problems, if there were any. A physical exam is then required, including a stomach exam. 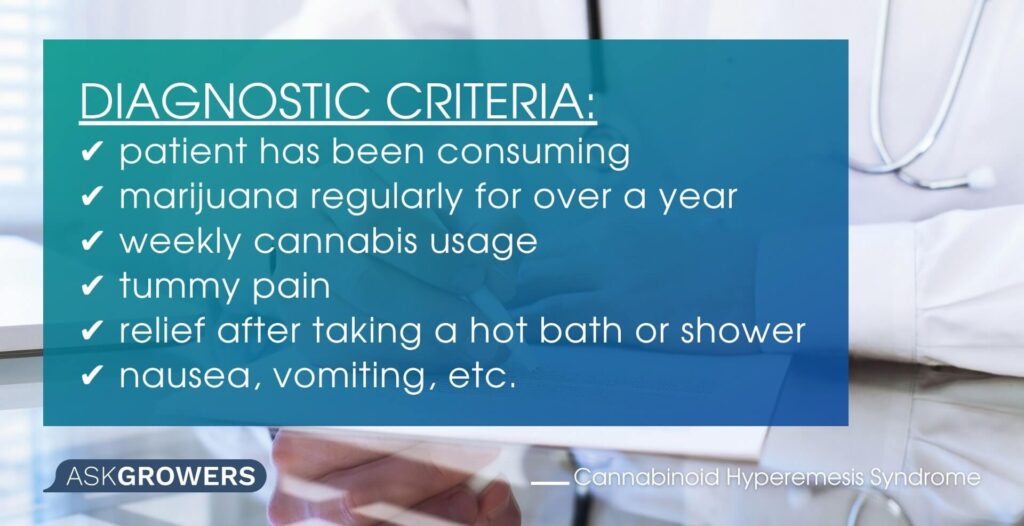 One of the things that can make the diagnosis faster and much easier is admitting to the doctor that you have used marijuana. For many healthcare providers, diagnosing the syndrome can be quite challenging and take a lot of time and effort. The main reason for this is that the patient does not declare and mention his cannabis use.

There are certain criteria to diagnose the syndrome. The first is that the patient has been using marijuana regularly for over a year. Some other things that may play an important role are weekly cannabis use, abdominal pain, relief after a hot bath or shower, nausea, vomiting, etc. Other things to consider are morning sickness, age (if the person younger than 50 years old), weight loss and disturbed eating habits.

When the health care provider diagnoses the CHS, the patient is explained what Cannabinoid Hyperemesis Syndrome is and then it is the treatment time.

One of the first steps doctors suggest is to stop using marijuana. If a person experiences extreme vomiting and nausea, hospitalization may be required, which can last a few days.

During the second phase, known as the hyperemesis phase, the patient may need treatment, such as:

All of the above are short-term treatments. The only way to treat the condition long-term is to stop using marijuana.

In most cases, the symptoms of the syndrome disappear fairly quickly. The patient may generally feel much better within a few days, usually a day or two. However, the symptoms may return if the person starts using cannabis again.

Prevention and consequences of untreatment

The only way to prevent cannabinoid hyperemesis syndrome is to stop using marijuana altogether. Unfortunately, People tend to use cannabis for years and become chronic users before CHS develops. This is because the syndrome takes a long time to develop.

If a person has the symptoms, especially vomiting, it can cause additional problems like dehydration. In addition, if the condition is not treated, some other complications may arise such as: B. Weakness, muscle spasms, shock to name a few. In the most severe cases, cannabinoid hyperemesis syndrome can lead to kidney failure, which can lead to death.

CHS is caused by regular marijuana use. As the syndrome develops, which takes a few years, the consumer will experience various problems such as nausea, vomiting, weight loss, disordered eating habits, etc. Symptoms come in three phases and can be very severe, especially in phase two.

Diagnosing the syndrome is one of the trickiest parts of the story, as people often fail to report marijuana use to their healthcare providers. Once the syndrome is definitively diagnosed, the patient becomes familiar with the condition, learns what CHS is, and begins treatment. The most important part of the recovery process is stopping weed use. If the patient continues to consume, the symptoms will come back.

The condition is a rare phenomenon and does not affect all smokers. Every marijuana user should know the right dose. If the marijuana user experiences extreme vomiting for a full day or more, contacting a healthcare provider is the best possible option.

Disclaimer: The information in this article is for educational purposes only and should not be used as a substitute for prescribed medication. See your doctor first!

This article originally appeared on AskGrowers.com and has been republished with permission.